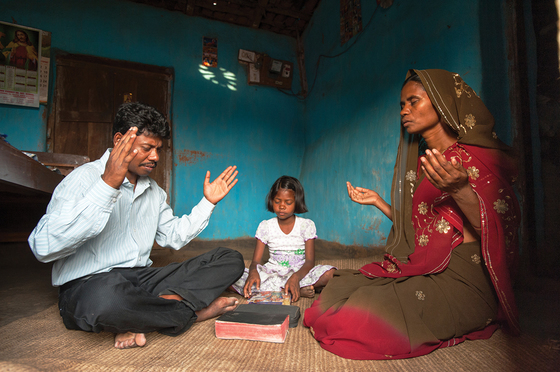 Gospel for Asia-supported pastor Samuel doesn't have a coat of many colors, but in many other ways he can identify with the Old Testament figure Joseph. Like Joseph, Samuel spent prime years of his life imprisoned away from his family, but he saw God’s hand mold years of injustice into something beautiful.

Caught in the Crossfire

On December 17, 2004, when police stopped Pastor Samuel and asked him to come answer some questions, he had no idea that he would be numbered among the most dangerous of criminals.

Pastor Samuel had grown up in a non-Christian home, but after experiencing the peace of Jesus, he chose to follow Him in 1998. Feeling a burden to tell others of Christ’s love, Samuel enrolled in a Bible college.

Around the time of his graduation in 2001, Samuel went to minister in a village 13 miles from any decent roads. Nestled among green jungles and hills, the village seemed peaceful. But it became a dangerous place as rebel insurgents began settling there. Although many people were too afraid to travel to this village, Samuel continued serving the people there because God had given him a vision for them.

A fellowship grew in the village as Samuel shared Christ’s love. During his first four years there, more than 80 people embraced Jesus’ love. God gave Samuel favour with the local police, who saw how he encouraged the villagers to live upright lives instead of joining the rebels.

But on April 7, 2004, turmoil boiled over when some of the rebels set off a bomb that killed 29 government security forces and injured at least 30 more.

After that, the village was caught in the crossfire. The police and rebels, both seeking control, harassed the villagers.

Eight months later, Samuel and his wife were walking to another village when police stopped them, asking if Samuel would come answer some questions. A few questions ended up becoming two days of interrogation at the police station. Even though Samuel insisted he was not involved in any criminal activity, the police accused him of taking part in the April bombing and put him in jail.

Imprisoned as a Terrorist, Encouraged by Jesus

Fear attacked Samuel as he realized this weighty charge could mean life imprisonment or the death penalty. Hearings dragged on, and his stay in prison turned from days to months to years.

Meanwhile, his wife and his daughter, who was only 10 months old when he was arrested, waited. Samuel knew they were struggling, but the Lord reminded Samuel that He would take care of him and his family.

As Samuel trusted the Lord, he had peace. His wife had brought him a Bible, which strengthened and encouraged him.

“The Bible used to be my companion,” he remembers. “Even while sleeping, I used to keep the Bible under my pillow. My time in prison was not in vain; I was able to spend time in prayer and reading the Bible.”

During Samuel’s prison term, not only did he have time to commune with the Lord, but he also seized the opportunity to share God’s love with men walking in the shadows of dark crimes, including armed robbery, rape and murder. Samuel knew that outsiders rarely visited the prison and these prisoners had very little chance to hear of Jesus.

Samuel longed to tell all the inmates of the same love and forgiveness that had changed his life. Every day, he sought to encourage the inmates with the hope of Christ. “I saw many sitting in a corner because they were down-and-out—they were discouraged—and I used to go to them, give them a piece of literature and tell them that Jesus Christ loves them.” Thousands of inmates lived in the prison, and all got to hear about God’s love during Samuel’s stay.

As God opened the prisoners’ hearts, they began to come to Samuel saying they didn't have peace of mind. He told them of the Prince of Peace and prayed for them. During Samuel’s eight years in prison, God touched the hearts of 50 men, and they decided to follow Him.

“The Lord blessed my ministry in the prison,” he says.

Samuel started a prayer group, and it soon blossomed into a thriving fellowship that met every day. Samuel trained two of the new believers to assist him in ministry—and to lead the fellowship if he were ever released.

The Legacy of a Prison Ministry

On March 13, eight years and four months after Samuel’s arrest, God answered prayers from believers around the world by reuniting Samuel with his family.

By the time of his release, more than 50 inmates had started attending the prayer and worship gatherings. He was able to leave this budding congregation in the hands of the two brothers he had trained, who started leading the daily Bible study and prayer meetings. He encouraged them to keep sharing Christ’s love in the prison until they were released or until Christ returned. “I told them that I would visit them sometimes,” Samuel says. “I told them that I would be praying for them.”

Samuel continues to correspond by phone with some of the men who came to know Christ through his prison ministry; they gladly tell him about their lives. They know that if they hadn't heard about Christ, their future would be grim.

“They tell me that they would have perished,” Samuel says.

Although Samuel endured years of injustice, God’s favour transformed this nightmare into a blessing for both Samuel and thousands of other prisoners. Samuel can now rejoice knowing that God used him to touch the lives of men who had never heard about Him before. Like Joseph, Samuel knows that the Enemy intended evil against him, but God used it for good.

Next: A Piglet Brings Dignity to a Family of Eight