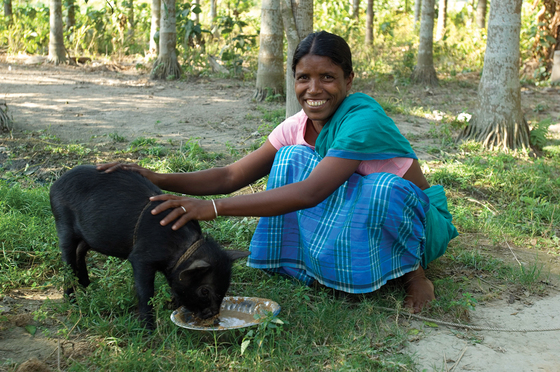 A Piglet Brings Dignity to a Family of Eight

Apurva and her seven children shared a small house consisting of a common room, a kitchen and one bedroom. The family of eight lived in poverty because Apurva, a widow, earned only a meager income from selling bananas she grew in her small garden.

But one day, Apurva’s pastor, a GFA pastor, gave her a gift that would drastically change life for her and her children: a piglet.

With her earnings from these two pigs, Apurva was able to build something her family desperately needed.

“My daughters are now growing up. I did not like for them to take baths outside,” she says. “Many times I felt bad . . . when I saw my daughters taking their baths outside. But I had no option since I did not have money to make a bathroom. With the money I received from selling the piglets, I was able to build a small bathroom and a toilet.

“Now I don’t have that uneasy feeling anymore about my children bathing. I feel secure. This toilet has helped us a lot. Before, we had to go to the jungle to go to the bathroom, but now it is very easy because we have it at our own house. I am very happy and thankful to God and to the church leaders who have helped me receive [the piglet], which has become a great blessing for my family.”

The gift of a piglet, donated by someone like you through Gospel for Asia’s Christmas Gift Catalogue, has not only helped a believer give her seven children a safe place for meeting their basic hygiene needs; it also has filled her with gratitude to the Lord. Thank you for your generosity!

Next: ‘Thank You’ from a Christmas Gift Recipient