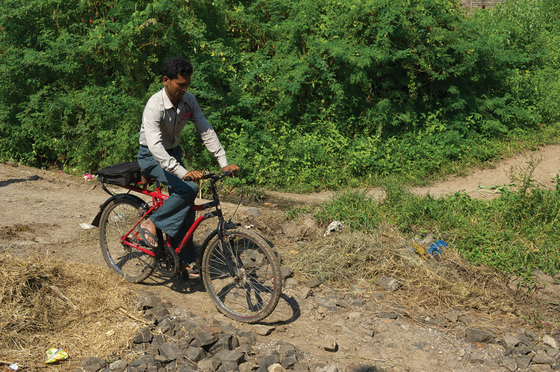 Gospel for Asia pastor Pavan ministers in multiple villages in a mountainous region of South Asia.The only reason he can do what he does is because of his bicycle.

One village he ministers in is made up mostly of people who adhere to a traditional religion. Damini, a young woman in the village, was a devout follower of her gods. She was sure they would take care of her and get her into heaven. She even played a prominent role in the local religious festivals.

God gave Pastor Pavan opportunities to share Christ’s love with Damini’s family. But they always rejected Him. They had no reason to question their gods—until Damini fell sick.

The 19-year-old developed a fever,and it wouldn't go away, even with medication. She grew pale and began to lose weight, and slowly, she realized her gods weren't going to help her.

Pastor Pavan lives relatively faraway from Damini’s village. Because the region is mountainous, the only way to get to Damini’s village is by biking there. Each time he goes, he crosses five miles of mountainous terrain, and then, when he comes to the river, he lifts up his bike and wades through the water.

Pastor Pavan had crossed the river to share Christ’s love before and had been rejected by Damini’s family. But as Damini continued to suffer from her sickness, she remembered hearing about God’s power to heal the sick—and her heart began softening toward the Lord.

Pastor Pavan again made the trek to Damini’s village, and when he found out she was sick, he went to her family’s house to pray for her.

With the family’s permission, Pastor Pavan began to pray, and the Lord healed Damini immediately! As she experienced Jesus’ power, she decided to put her trust in Him.

Damini began joining other believers, many of whom travel long distances, to worship the Lord in a village near hers. Pastor Pavan looks after this fellowship, and he gets thereby riding his bicycle.

At one of the fellowship’s meetings,Damini met and became good friends with another young lady, Gajra. The girls spent time praying and reading Scripture together, and the Lord strengthened them in Him.

Although Damini’s family opposed her, she stood firm in her faith, and eventually her mother came to know the Lord. She is now growing in Him, too.

Damini and her mother, along with many others, have come to know the Lord and be discipled through Pastor Pavan, but he couldn't have ministered to many of them if he hadn't received his bicycle.

“I have reached many with the Good News of Jesus by using the bicycle,” Pavan says, “and I don’t know what would be of Damini and others if I were not given a bicycle.”

Thank you for helping pastors like Pavan reach more villages by providing for bicycles.