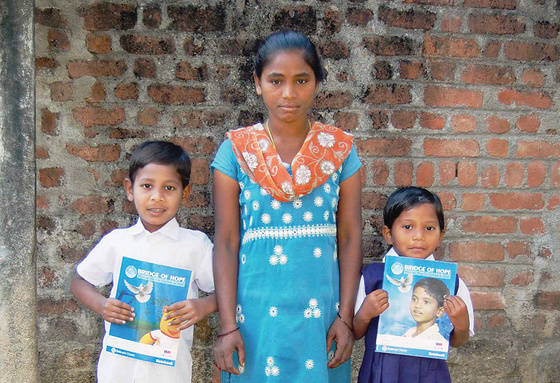 Most 11-year-old girls are preoccupied with things like school, sleepovers and maybe the occasional daydreams about life as an adult. But for Vallari, being 11 meant turning her attention to her family— the one she was starting.

Most 11-year-old girls are preoccupied with things like school, sleepovers and maybe the occasional daydreams about life as an adult. But for Vallari, being 11 meant turning her attention to her family— the one she was starting.

Even in a culture where girls sometimes marry very young, Vallari’s marriage at age 11 was an unusual case. But growing up in a village filled with superstitions and unusual traditions, child marriage was a common practice. By the time she was a teenager, she already had a husband and two children to care for.

The young couple struggled to maintain a harmonious union. Arguments led to resentment, and after a while, the strain proved to be too much for the pair. The couple separated, and Vallari moved back into her parents’ home, with two young children in tow.

Rare is the teenager who finds herself in a position of starting over, especially with two children, but that is exactly the circumstance Vallari faced. There were problems with moving home: Vallari’s parents owned land where they cultivated a variety of foods, but the return on the products was minimal and Vallari’s children sometimes went hungry.

The children didn’t have many clothes to wear either, and they were too poor to attend school. Vallari felt helpless. With nothing to lose, she went to a local Gospel for Asia Bridge of Hope centre and asked if there was a place for her two young children.

A Future with Newfound Hope


Whenever new children join a Bridge of Hope centre, the local pastor and staff make customary visits to the family at their home. Vallari listened to Pastor Dilawar’s message of hope with keen curiosity. Her parents weren’t as interested, but Vallari’s heart had been opened by the changes she had seen in her children.

Ever since they joined the Bridge of Hope centre, Vallari had noticed a night-and-day difference in her two young ones. They had developed with their education, but more notably, they demonstrated a new discipline and respectful behaviour at home. And the daily meal and clothes they received were a huge relief to the family.

Vallari’s gratitude led her to insist that Pastor Dilawar conduct prayer meetings in her home. It was her way of thanking him for all the Bridge of Hope centre had done, but a change was occurring within Vallari as well.

She looked back on her past and could now see what she had been missing all along. Vallari decided she didn’t want to be without Jesus any longer.

Ever since Vallari’s decision, God has been transforming her day by day. She is now attending church with her children regularly, as she enjoys a restoration period from a motherhood (and adolescence) filled with trials. She is now looking forward to a future of hope and promise for both herself and her children.

Thank you for your role in bringing a brighter future to women all across South Asia, just like Vallari.

Next: Learning to Read Changed Her Life