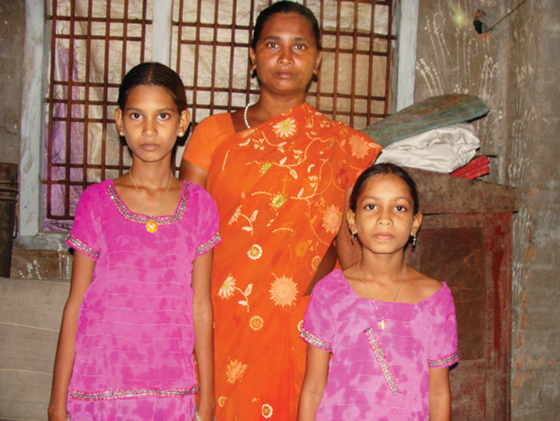 With no one to turn to, Mayuri began selling her body, using the little she earned to feed her daughters.

Mayuri’s father was a drunkard. Mayuri and her mother worked each day, and Mayuri’s father sometimes demanded their earnings so he could fuel his addiction. If they refused, he’d beat them badly.

Mayuri’s hurting mother begged deity after deity to change her husband, but the family only continued to suffer.

When Mayuri was 14, her mother married her off in hopes of saving her from more abuse. Five years into her marriage, Mayuri bore a child—a girl. Mayuri’s husband, angered by the birth of a daughter, turned cruel. A few years later, Mayuri bore another daughter.

Enraged, Mayuri’s husband beat her, and together with his mother began torturing her, driving her toward the brink of death.

So Mayuri ran, taking her two girls to live with her at her mother’s home. She planned, as many in South Asia do, to move to the Middle East to find work. She borrowed money to pay her liaison, but the liaison swindled her. Indebted and helpless, the single mother and her two daughters went hungry.

With no one to turn to, Mayuri began selling her body, using the little she earned to feed her daughters. Even so, prostitution didn’t make her enough money to meet her family’s needs.

Then, in 2010, Mayuri felt a burning sensation in her stomach. She made it to a doctor who found a cancerous tumor in her uterus. With no money for treatment, she sought help from the temples, but none came.

The God She Didn’t Call Answered

Around this time, GFA pastor Patakin began sharing the Good News with Mayuri and offering her Gospel literature. As the prostitute realized that Christians didn’t isolate or look down on her like others did, she took Pastor Patakin’s invitation to come to a Christmas service.

There, a joy previously unknown to Mayuri filled her heart. The love she experienced through the believers began to change her, so she decided to join them each week.

One Sunday, the Lord spoke to her heart about the healing He brings. The pastor also shared stories recorded in Scripture of women who were healed by the Lord Jesus, asserting that God could do the same for them.

That day, Mayuri put her trust in Christ, and the Lord gave her new life. On top of that, He completely healed her of cancer!

Since that day, the Lord has provided a daily wage labor job for Mayuri. Her daughters have also been redeemed from shame, and they are growing in the Lord in their Sunday school.

“Jesus Christ is the true God,” Mayuri shares. “Today I am living; that is only by the grace of God.”

Next: Sewing in Due Time