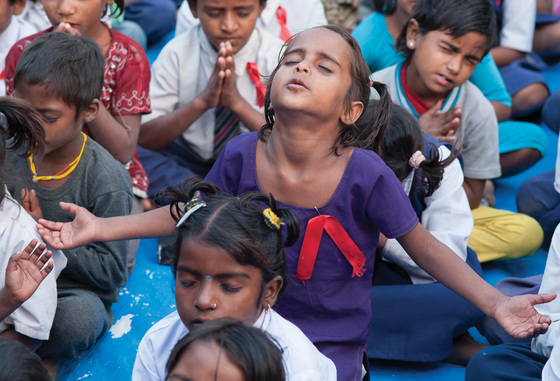 As she grew closer to Him, she often told the Lord her most secret desires.

Eleven-year-old Oja’s parents did everything they could to provide for her and her two brothers, but their finances still came up short at times. They did not have a home to call their own, and each day they struggled to find work to feed their children.

One thing Oja’s parents did not have to search for, however, was a good friend for their daughter. Iksura, Oja’s best friend, believed in Jesus, and although Oja came from a different religious background, she decided to start going to Sunday school with Iksura each week.

As Oja sang songs about Christ and heard stories from God’s Word, she began to love Jesus more than anything else in her life. Desiring to know Him, she started spending time with Him in prayer.

Oja became more involved at Iksura’s church, and during a time of fellowship at a believer’s house, Gospel for Asia pastor Udar explained the Good News of Jesus to her more clearly. With her heart already brimming with love for Jesus, Oja then realized He was her Saviour.

As she grew closer to Him, she often told the Lord her most secret desires.

Although she had not mentioned it to anyone else, Oja asked God to give her the opportunity to attend a nearby school. Her parents did not have the money to send her there, but she asked Jesus to make it possible anyway. Because she scored so well on a government scholarship exam, Oja was able to enroll in the school she had prayed so faithfully about.

Another request close to her heart was that the Lord would provide for her family. Not long afterward, the government gave a piece of land to Oja’s family. Then Oja asked God to bless her father, who wanted to raise livestock, and two weeks later, a relative gave him a pair of goats. Now Oja’s father has eight goats to raise on the land he received.

More than just seeing God answer her prayers for physical provision, Oja saw Him take care of her family’s spiritual needs: both of her parents chose to follow Jesus wholeheartedly!

The Lord used a simple invitation to Sunday school to change Oja and her family from the inside out. Now even their relatives can see the difference Jesus has made in each of their lives.