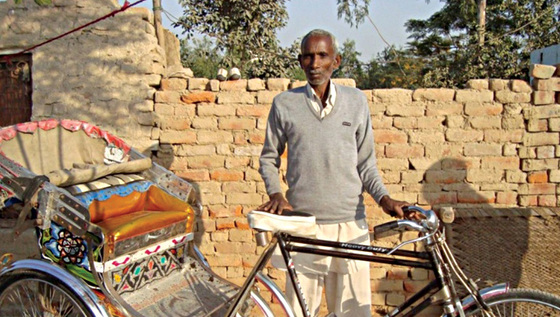 Maaran’s new lifestyle was tearing his family apart. He had fallen into a deep depression while struggling to earn enough income to provide for his wife and four children who still lived at home. He began drinking to relieve the pressure he felt, and soon he became an alcoholic. As Maaran’s life spiralled out of control, his three sons grew angry with his irresponsible behaviour, and fights often broke out.

A Hope-Filled Message, a Timely Gift

One day, while he was still stuck in the mire of depression and addiction, Maaran found a reason to hope: he met Gospel for Asia pastor Darpak and heard the Good News of Jesus Christ. After listening to the pastor’s words, Maaran shared about the broken state of his life and his family. He asked Pastor Darpak to pray that he could work hard and earn enough to buy a new source of income—a rickshaw. Maaran knew that with his own rickshaw he could provide for his family more reliably.

Pastor Darpak assured Maaran he would pray faithfully. At the same time, the pastor thought of a way he could help. He told the regional Gospel for Asia office about Maaran’s family. Then, at a Christmas gift distribution program a few months later, Maaran received just what he’d been longing for: a new rickshaw! Overjoyed, Maaran thanked the church for the life-sustaining gift.

With the rickshaw, Maaran began earning a stable income for his family. Maaran and his wife knew God had answered Pastor Darpak’s prayers, and after spending time listening to the Good News, they began to believe in Him. Now Maaran and his wife are growing closer to Christ and attending worship services at Pastor Darpak’s church. Through the love of this GFA pastor and the gift of a rickshaw, a man who was once sinking beneath the weight of depression now knows the peace of Christ.

Next: ‘I Don’t Have Extraordinary Power to Heal’