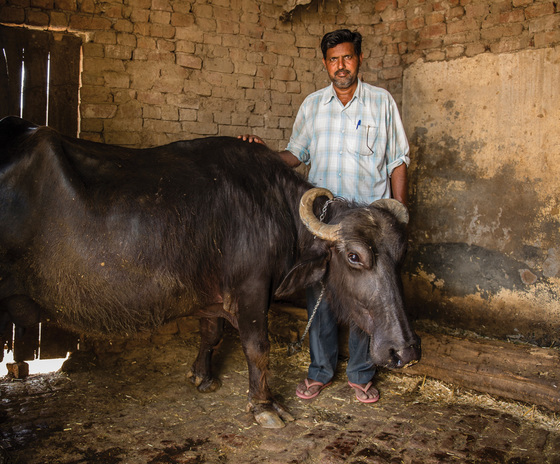 Saving a Child—and a Buffalo— With a Bicycle

When Gospel for Asia pastor Vikranta arrived in the small village, he knew where he was going and what to expect.

The family he was about to visit, however, had no idea he was coming or how much their lives were about to change.

Someone had told Vikranta about a family in desperate need of help. With faith in his heart, he hopped onto his bicycle and travelled five miles to visit them. When he arrived, he introduced himself and told them why he’d come: He was there because of their buffalo.

Garima and her family depended on their water buffalo. They were devastated when the creature fell ill, unable to produce its life-sustaining milk—milk the children needed to drink. Garima and her husband did all they could to heal the buffalo, but nothing helped. Their situation grew so desperate that one neighbour, a follower of Jesus, called the pastor on their behalf.

When Vikranta arrived, Garima told him of their plight: “We have taken our buffalo to the [veterinarian], but . . . its health is getting worse,” she said.

Vikranta encouraged her family to put their trust in Jesus and offered to pray for their water buffalo.

For many days, he travelled the miles between their villages on his trusty code bicycle to visit and pray for Garima and the family’s buffalo. And God honoured Vikranta’s persistence. Garima’s buffalo started producing milk! At the same time, God produced faith in Garima’s family: They each decided to walk with Jesus.

Now they meet with Pastor Vikranta every Friday, opening their home so he can minister to a small fellowship of believers.

With a healthy buffalo and a new hope in her heart, Garima could hardly have been happier—that is, until her granddaughter fell ill. This time, sickness threatened to rob them of far more than milk.

The sickness became so severe that Balik, their son-in-law, blamed his daughter’s illness on the newfound faith of his in-laws. His opposition was so strong, it ripped his family apart.

Following Pastor Vikranta’s example, Garima and her family didn’t give up hope and continued to pray. Soon the little girl began to laugh and play, and even Balik recognized God’s hand at work.

Because of a Bicycle

Daily journeys that once took hours have become just a short bike ride.

“Because of this [bicycle], I could start ministry in this village,” Vikranta shares. And he can do much more than that. Pastor Vikranta can travel several miles to neighbouring villages to share this same message of hope and love found in Christ and reach out to those in need of prayer. The fellowship that meets in Garima’s home is one of eight he is able to minister to. Thank you for standing with him.