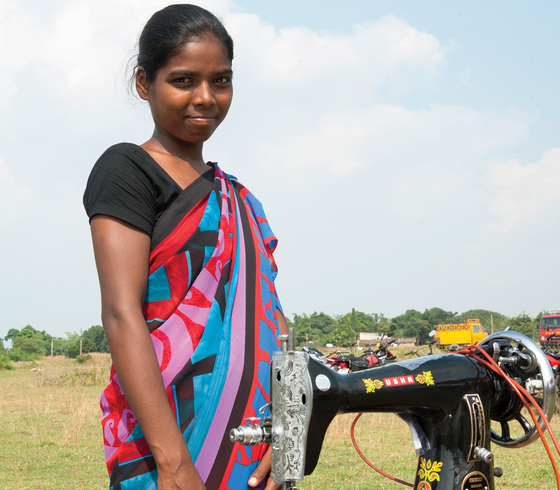 ‘I Was a Beggar; Now I Am a Believer’

Sarbani, 18, lived the life of a beggar. She’d watched her parents go door to door, begging for one meal a day, and now she followed in their footsteps. She didn’t think she would ever climb out of this poverty.

One day she happened to beg at the house of Gospel for Asia pastor Rajiv. He gave her some rice, but it wasn’t enough for her entire family. So she kept begging. Later, when Sarbani knocked on another door and asked for food, she saw Pastor Rajiv inside, praying with a family from his congregation. Pastor Rajiv recognized her voice and went up to her. He wanted to know why she was still begging.

“Sir, this is my daily routine,” Sarbani replied.

When Sarbani explained that her family relied on her to beg, the pastor’s heart broke.

After talking more with Sarbani, Pastor Rajiv decided to visit her family one day. A wave of surprise shook Sarbani and her family when the pastor came to the tent where they lived. They weren’t used to people who didn’t beg wanting to spend time with them.

Then, one Sunday morning, Sarbani discovered Pastor Rajiv’s church. Joyful songs filled her ears as she entered. She listened eagerly, wanting to know what the Christians were singing about. When Pastor Rajiv began sharing the message, God’s Word took hold of Sarbani’s heart. She decided to attend church on a regular basis.

As Sarbani began growing in the knowledge of Jesus, she learned God would take care of her family’s needs. She relied on Jesus more each day and soon decided to follow Him.

Sarbani wanted to stop begging, but how would she help provide for her family? Pastor Rajiv had an idea.

Sarbani had learned to sew from a friend who owned a sewing machine, but she could never afford one herself. At Pastor Rajiv’s request, Sarbani received a sewing machine through Gospel for Asia. This gift filled her and her family with joy—Sarbani could now earn a decent income without begging!

See how one simple tool provided income for a family in desperate need.

Now she earns enough to provide for many of her family’s needs. Best of all, Sarbani and her parents know the riches of Jesus’ love, and they are serving Him faithfully.

“I was a beggar; now I am a believer,” Sarbani says.

Through your generosity in providing sewing machines, more people in Asia are finding their true wealth in Christ. Thank you!

Previous: Praying Granddaughter Refuses to Give Up Hope