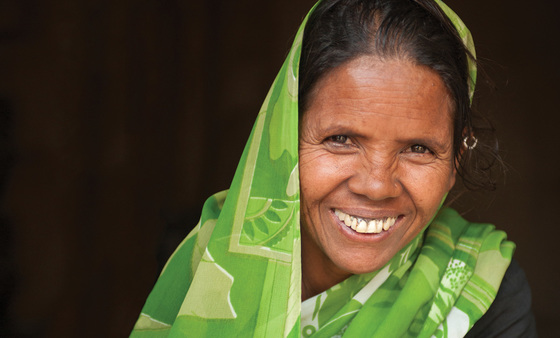 A Widow’s Journey from Dirtiness to Dignity

With her usual messy hair and dirty clothes, Tulasi approached her neighbour’s home to ask a favour.

The widow’s poor hygiene and unkempt appearance repulsed most of her fellow villagers, but Tulasi was in for a surprise: Inside her neighbour’s house, eyes of compassion, not disgust, waited for her.

People typically didn’t want to spend time with Tulasi, but at least some would let her work for them. She earned meagre wages by cleaning homes and washing people’s dishes. Her son, who lived in another city, sent what money he could to help, but still Tulasi and her two daughters survived with very little food. At times, Tulasi was so hungry for meat that when she saw chickens roaming about, the famished widow fantasized about grabbing them and devouring them raw.

On top of all this, Tulasi had lived with constant physical pain for three years. Her stomach burned, and her body ached.

When Tulasi went to a neighbour’s home one day to ask if she could borrow an axe, she didn’t know a Women’s Fellowship group had gathered there for a prayer meeting. When the group, led by Gospel for Asia missionary Eila, saw Tulasi’s unkempt appearance, they wanted to know her story. The hostess introduced them and told the team about Tulasi’s health struggles.

Hearing of this widow’s desperate situation, Eila and some of the women decided to begin visiting Tulasi. They told her Jesus cared for her and prayed earnestly for God to heal her. After four days, Tulasi’s pain vanished! Through the healing, Tulasi realized how much God loved her. Soon, she and her older daughter started worshipping Him with the local congregation.

In addition to receiving spiritual encouragement from the local church, Tulasi also received practical help. The believers collected money, clothing and food items to help her family amidst their hardships.

Although Tulasi still labours each day for meagre wages, she keeps a tidy appearance and a clean lifestyle. She has a new identity in Christ that gives her dignity, and she has a new family in Christ that comes alongside her in times of need. This widow, who once seemed destined only for disgrace, has now experienced love and hope.

Thank you for partnering with Gospel for Asia’s ministry to widows. Through your generosity and prayers, congregations can continue to support widows in practical ways, showing them how much Jesus cares.

Previous: Light, Confidence in the Shadow of Death

Next: ‘Will Your God Accept Me?’