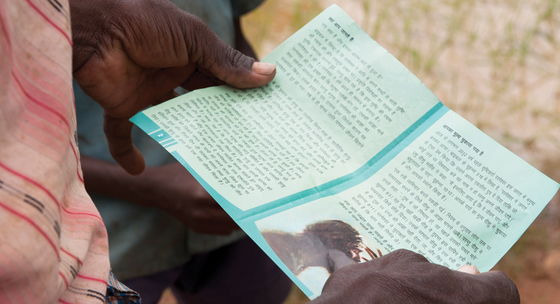 Finding Peace After Death and Addiction

Ellis felt a strange sense of peace come over him. The pastor had only spoken a few words to him, but they were enough. He hadn’t experienced such peace in what seemed like an eternity.

As he carried home the literature the pastor had handed him, joy filed his heart, and it shone on his face.

Ellis had suffered much loss in his lifetime; the guilt of his past and the agony of his daughter’s death had left a giant hole in the tender places of his heart. When Ellis met the pastor, he was powerless to help his family, and it seemed life was steadily declining.

Ellis’s bad habits had caused his family much grief. No matter how hard his wife or parents pleaded with him to stop hanging around with a bad crowd, their words failed to move him. Caught up in addictions, Ellis couldn’t stop himself.

“I was in the pleasures of this world,” Ellis says. “As the days passed by, I became worse than before.”

When Ellis’s daughter suddenly fell sick, his neighbours said evil spirits were the cause of her illness. So Ellis took her to several witch doctors, but her condition only worsened, and she died.

Ellis didn’t know why this agony had come. It snatched away his daughter—and every form of happiness in his home. Sorrow consumed Ellis. Over time he was able to overcome his deep pain, but then a new kind of trouble overtook his family.

“Both of my sons started facing problems,” Ellis relates. “They could not get proper sleep at night, due to fear.”

Strange powers began harassing them, giving his sons nightmares. When the torment affected them in the daytime, they had no rest.

“We had lost hope that we would overcome this problem,” Ellis remembers.

It was at this point Ellis met Gospel for Asia pastor Mishu. The pastor and his wife serve in Ellis’s village, faithfully carrying the love of Christ to the people.

Pastor Mishu offered Ellis some booklets, which Ellis received gratefully. “Read these,” the pastor said. “These booklets talk about the love of Jesus Christ. May God’s peace be with you.”

The pastor’s kind words and blessing brought a quiet rest to Ellis’s heart.

Ellis’s step was lighter as he carried home the booklets. He thought deeply about Pastor Mishu’s words.

“I liked his behaviour,” Ellis told his wife, “because he blessed me in the name of Jesus Christ, and I felt a lot of peace in my heart.”

Seeing his joy, Ellis’s wife encouraged him to read the literature.

Family Has a New Future

The next day, Pastor Mishu visited Ellis’s home and prayed for the whole family. Ellis saw the love and forgiveness found in Jesus and accepted His grace and mercy.

Ellis, now free from his addictions and bad habits, is at peace. Because of Pastor Mishu’s earnest prayers, Ellis and his family no longer struggle with fear; instead, genuine joy fills his household.

“I thank my Lord because in the right time He sent His servant to save me,” Ellis says.

Through your support, missionaries like Pastor Mishu are spreading the love of Christ to those living in bondage. Thank you for partnering with us to reach those who have never heard of the peace Jesus offers.

Next: Why Her Daughter Won’t Get Married at Age 12