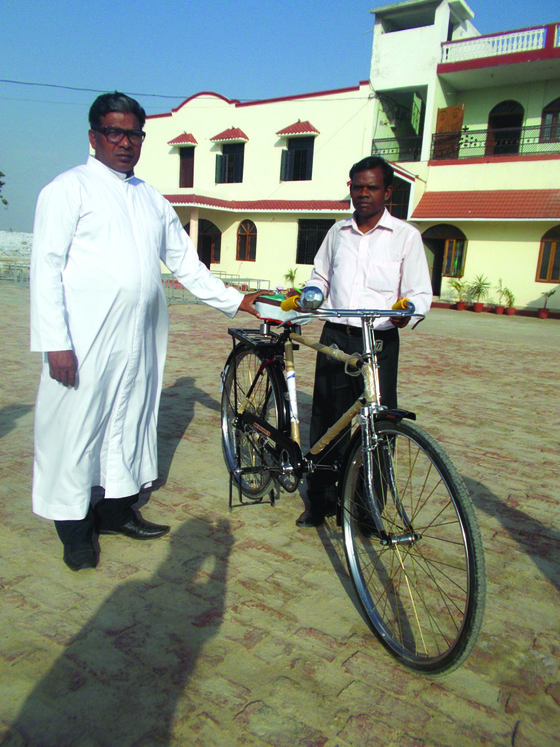 Feet kick up clouds of dust along the road. The hot sun beats down, causing foreheads to shine with sweat. Some people walk miles for the exercise, but Gospel for Asia- supported missionaries walk miles out of love.

Missionaries, both men and women, sometimes have to walk long distances to tell others about the redeeming love of Jesus. Sahila, a Gospel for Asia-supported Sister of Compassion, is one of these travellers.

“We are serving the Lord in [one village] among [tribal] people,” Sahila says. “We call the women and teach them from the Word of God and help them to stay neat and clean. But every Monday we go to another village, which is three kilometers away from where we are, to visit the people.”

“It’s very difficult to visit these villages on foot in the scorching heat of the sun,” Pakhi explains.

In South Asia, April and May are often the hottest months of the year. The oppressive temperatures climb well above 100 degrees on a regular basis, making it difficult and sometimes dangerous to travel very far on foot.

Sahila, Pakhi, Kajri and 102 other missionaries received bicycles of their Bicycles/Compassion Services own at a Christmas gift distribution event in 2014. These bikes help our brothers and sisters share the love of Jesus in distant locations. Gospel for Asia-supported pastor Aayu also received a bicycle at this event. It was impossible for Aayu to travel long distances by foot in the summer heat before he received this gift.

“I travel at least 10 kilometers for . . . house visits,” Pastor Aayu says. “Since I did not have any means to travel, I used to borrow a bicycle from my neighbour to travel long distances. If I had to visit nearby villages, I never used the bicycle; rather, I travelled on foot because it’s not good to always use others’ things.”

Now, with his new gift, Pastor Aayu can redeem both time and energy by riding his bicycle to places both near and far, even when it’s hot. Within just a few months after he received the gift, 10 people came to know the Lord as a result of Aayu’s encouragement and visits with them.

“I am very thankful to Gospel for Asia that I could receive a bicycle, which is very useful and helpful to my ministry,” Aayu states.

We thank God for your heart to equip our brothers and sisters with the needed tools so they may make His name known among the nations. Thank you!