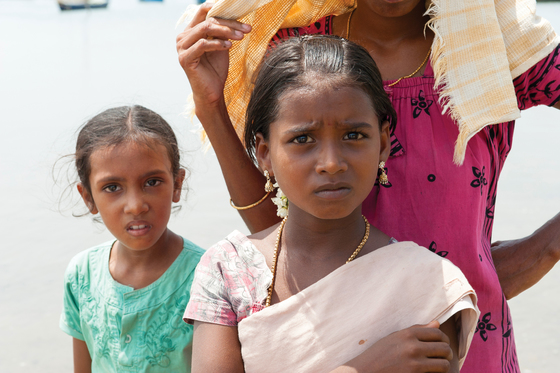 Mishti’s father was dead. She still couldn’t get over that one, solitary fact. Grief had washed over her at the dreadful news. Life, she felt, was over.

But hope was just around the corner.

Mishti had a brighter outlook on life just two years earlier. Her father worked as a truck driver and helped provide for the family’s needs. Her sister was in school and was receiving special help at a Gospel for Asia supported Bridge of Hope centre. She had a younger brother and another sibling on the way. Even though there were some struggles in life, Mishti was content.

But then her father became ill. He had met with a woman during his travels and came home infected with HIV. The family tried all they could to keep him healthy, but the virus quickly claimed his life.

Over time, Mishti took on more responsibilities around the home. She cared for the family while her mother laboured in the fields, trying to earn some wages to care for the four children.

But as time passed, work became difficult for Mishti’s mother. She couldn’t stand as long as she used to. Pain crept into her arms, legs and stomach, eventually clamping them in an iron grip, where there was no relief. No matter how many prayers the family offered to their ancestral deities, doctors confirmed that she, too, had been infected with AIDS.

In the midst of these challenges, the family discovered help and hope in an unexpected place: a tutoring program. For three years, Mishti had watched her little sister go to Bridge of Hope. The year after her father died, her little brother enrolled as well. One of the tutors at the centre lived nearby, and two other staff members came to visit Mishti’s family from time to time. Mishti’s siblings had found help and hope at the centre, and that hope found its way to Mishti and her mother.

At that time, Mishti’s neighbour, the tutor, encouraged the family to go to the local church and ask for prayer for healing. Mishti’s mother, despite her devotion to her deities, was desperate for help, so she went. While there, she found more than healing—she found peace and comfort as she listened to God’s Word and began praying to Jesus. She went back to the church many times, longing for a greater measure of that peace.

Family Embraces the Source of All Hope

Mishti could tell her mother’s heart was changing, and one day she realized her mother’s strength was coming back too! Hope flowed into the teenager’s heart as she considered the power of Christ.

Years passed. Her siblings’ attitudes and grades continued to improve as they attended Bridge of Hope. Mishti’s mother, still alive and painfree despite her condition, had decided to embrace the love of Christ. Mishti did the same.

Hope had returned to her life—this time, for good.

Bridge of Hope is just that—a bridge through which God can bring hope to the impoverished, downtrodden, sick, hurting and discouraged. As Mishti saw Jesus strengthen and sustain her mother, she understood His power. As she witnessed the love of the tutors and the growth of her siblings, she understood His love. Today, Mishti is studying the Word of God. She longs to tell others about the Jesus who brought hope back to her life.