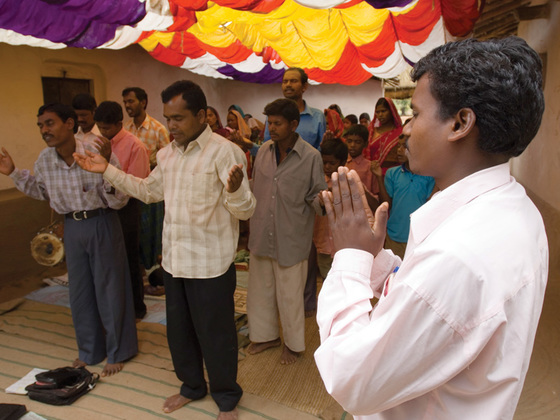 God’s Word in the Hands of His Servant

Congregations like Pastor Lomash’s, and like this one pictured, engage in corporate prayer and intercession for the needs of people in their community.

“Come to me, all you who labour and are heavy laden, and I will give you rest,” Pastor Lomash quoted, telling the attentive family of Jesus’ words from Matthew 11:28.

Pastor Lomash went on to tell Bhakti and her family how God had transformed his own life, and as he shared, Bhakti longed for the peace and rest Jesus offered.

From Security to Attempted Suicide

Bhakti had grown up in a happy home and faithfully followed the religion of her ancestors. When she was married at the age of 24, peace, prosperity and happiness continued to mark her life . . . until her husband began drinking alcohol. It started slowly, but before long he came home drunk every single day. He scolded Bhakti and argued with her continually, leading her into hopelessness.

In desperation, she contacted a witchdoctor who told her to sacrifice a goat, but even this did not bring the restoration she longed for. Unable to cope with the difficulties, Bhakti tried to commit suicide—not just once but three times. Thankfully, her parents were able to intervene and save her life.

Then God sent one of His servants, Pastor Lomash, to speak to Bhakti’s family. When he met them, during the course of the conversation, he shared his testimony and some Scripture with them. They asked him if they could start going to church with him, and he said yes. Pastor Lomash told the church of Bhakti’s family troubles, and the congregation prayed earnestly for restoration. Miraculously, after two weeks, peace returned to Bhakti’s home life: Her husband stopped drinking and started treating her with love again. This transformation provided the catalyst for Bhakti’s whole family to find true and lasting peace.

Every day, Gospel for Asia-supported pastors like Lomash have the opportunity to speak to men and women in need, ministering the Word of God to those who are eager to hear of His peace and grace. Thank you for standing with us to see more people understand the great love of Jesus, the Prince of Peace.

Previous: A Jesus Well Was the Ticket!