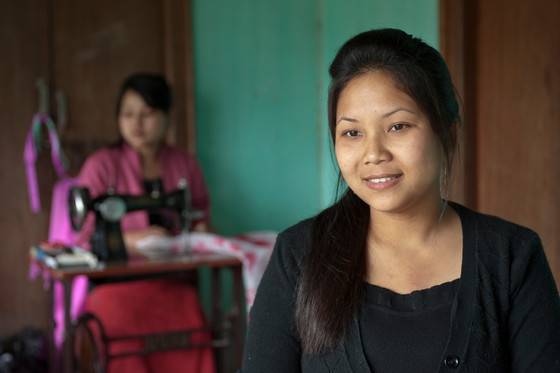 Sewing Her Sister Through College

Harshika knew how to tailor clothes, but she could not afford her own sewing machine. When she and others, such as these women pictured, receive sewing machines, they are able to significantly increase their family’s income.

When accident left Harshika’s father unable to use his hands and legs, the future of the family became uncertain. He had been their sole provider. Harshika’s mother tried to find work in people’s homes, but her income didn’t meet all of their needs.

Harshika, 22, had dropped out of school in the eighth grade. Now it seemed her younger sister Madhushri, the first of the siblings to make it to college, would have to drop out as well. But God had other plans.

When a local GFA-supported pastor named Ketan heard about the family’s dire situation, he sought a way to help. After he learned Harshika could sew and had even been trained in tailoring, he arranged for her to receive something she could not have afforded on her own: a sewing machine, one of the gifts found in GFA’s Christmas Gift Catalogue.

It didn’t take long for neighbours to find out about Harshika’s skill, which brought a steady stream of customers. Through the proceeds from her work, Harshika has been able to help her family and even pay for her siblings’ continued education.

Now Harshika and her sister Madhushri meet with the local congregation to hear about the God that Pastor Ketan serves. Madhushri, having witnessed Christ’s love and care for her family firsthand and hearing about His grace from her pastor, has decided to embrace the love of the One who has provided for her future, the One who inspired someone else to provide her sister with a sewing machine.

Even a gift as simple as a sewing machine can have a tremendous impact on a family in need. By partnering with GFA, whether you donate toward sewing machines or you support the work of national missions, you are part of transformative stories of grace like this one, which are happening every day. Thank you so much!

Next: Short Stories About Women Missionaries