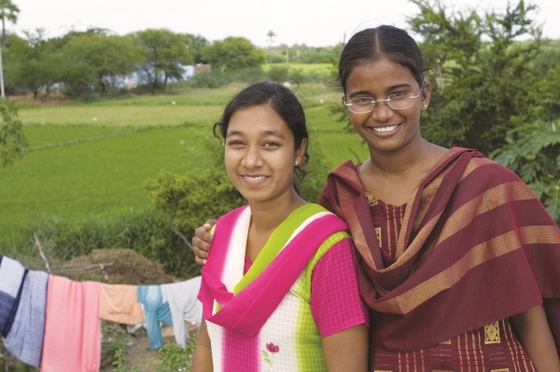 After learning about Jesus, many women, like these two pictured, choose to use their words to bring God glory.

From Gossip to Godly

Akhila’s mouth had uttered lies and half-truths. It had passed on things her ears heard, things that weren’t meant to be shared with others. It had spoken with manipulative intent, poking, prodding and provoking others.

But today her mouth did something different: It read aloud the Word of God.

God’s Word in the Mouth of a Whispering Wife

Akhila had spent most of her 23 years as a gossip and busybody, always seeking to get something from people. She wasted her life on the idle, fleeting pleasures offered by the world.

But when she met a GFA-supported pastor, she learned about Jesus, prayer meetings and God’s Word. She took a copy home to read, and her mouth found something new to do.

Reading the Word aloud became a daily habit. The more Akhila read, the more God moved in her heart. She also attended prayer meetings with the pastor and other believers.

One day, Akhila’s eyes lingered on the words she had just read aloud: “Behold, I stand at the door and knock.”

Something stirred within her. Her eyes reverently traced the letters, and she continued, “If anyone hears My voice and opens the door, I will come in to him and dine with him, and he with Me.”

As Akhila meditated on the Messiah’s words from Revelation 3:20, passages like John 3:16 came to her heart as well—a verse familiar to many but new to her: “For God so loved the world that He gave His only begotten Son, that whoever believes in Him should not perish but have everlasting life.”

As God’s Word caressed her soul, Akhila made a decision: She opened the door of her heart to Christ, and she’s never been the same.

Using Her Mouth for God’s Glory

Akhila doesn’t strive to find satisfaction through gossip anymore—she has found that which satisfies her soul. And today, the mouth that once worked to hurt and malign others now seeks to build them up through prayer. Akhila’s life has been transformed, and it’s all by the power of God working through His Word, just as He said He would.

Previous: Where Dreams are Made Possible

Next: No Ordinary Building