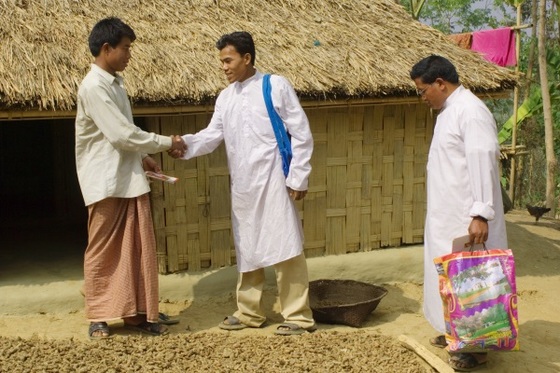 GFA-supported pastors, like these men pictured, know the importance of developing a relationship with the men and women in their community. It is often in the context of such friendships that God reveals His character best.

Why Was He Different?

Janvijay lived a pretty pampered and relaxed life. As the youngest of his siblings, he was well taken care of, even though his father died when he was a young boy. His mother loved him. The only thing that made her feel uneasy about her youngest was his lack of reverence for the family’s religious traditions. But Janvijay was obedient and respectful to his elders, so she didn’t correct or scold him.

As 33-year-old Janvijay led his easygoing, carefree life, he began to form a friendship with GFA-supported pastor Deenbabdhu. Deenbabdhu was the same age as Janvijay, and as their friendship grew, they both began to share their life struggles and joys. Janvijay never really listened seriously when Deenbabdhu would talk about his best friend, Jesus. Religion wasn’t an interest to Janvijay, and he would always change the topic.

But as time went on, Janvijay noticed Deenbabdhu’s life was different from the lives of his other friends. Whenever Janvijay got sick, Deenbabdhu would pray for him and he would get well. But Janvijay would brush this off and think little of it—he was sure it was just the medicine he took that brought him healing. But Janvijay did notice something peculiar about his new friend. It seemed Pastor Deenbabdhu had joy and peace regardless of his circumstances. This revelation caused Janvijay to search for his secret.

Janvijay started attending Pastor Deenbabdhu’s worship services and listening to the Word of God. As Janvijay continued to attend church, his heart unfolded to the hope of Jesus and His love and steadfast peace.

Janvijay is grateful to his friend Pastor Deenbabdhu and told him, “I am indeed thankful to you for your faithfulness in your ministry. I am happy to have you as my true friend. ... As I came to know Christ, I came to know the meaning of my life. To obey His words is the purpose of my life.”

Now that Janvijay decided to follow Christ, he doesn’t have such an easy going life as his family is unhappy about his new love for Jesus. But Janvijay will not turn back. He uncovered the secret of his friend and now has a life full of peace and meaning.

Because you prayed and because you have sacrificed and given, we all get to hear about Janvijay’s story and hear how God is working through His precious children like Pastor Deenbabdhu. Thank you!

Previous: A Place for Prayer