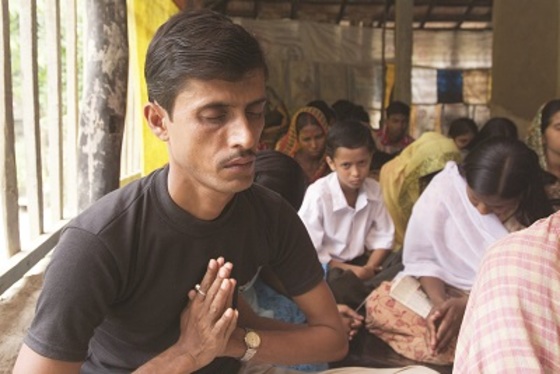 Jaiman (not pictured) had no peace in his life as he went from place to place trying to find out who God was. Then the Lord led Jaiman to a GFA-supported pastor who was able to point him in the right direction. Now, he says he has “marvellous peace in his heart” because of Jesus.

“Soon after the birth of my sister, family problems started between my parents,” Jaiman, a GFA-supported pastor, recalls. “My father had affairs with other women.”

Because of the escalating problems in the home, Jaiman’s mother put him in a Christian boarding school. Soon after, she left the family.

When Jaiman was in fifth grade, his father pulled him out of school, putting an end to his education. After Jaiman turned 14, he left his father and worked in a hotel as a waiter for a time. Then, for more than a decade, he drifted around the nation.

“I wandered as a vagabond,” Jaiman says. “I was restless and had no peace in my heart.”

One day Jaiman asked a religious leader, “Who is the real god?” The priest told him the name of a god to worship, saying, “If you worship him, you will get peace.”

So Jaiman started worshipping that god, “but I still had no peace or happiness in my life; rather, I became more restless.”

When Jaiman was 27, he talked with a Christian pastor about who the real God was, and the pastor pointed him to Jesus as the One who can give real peace and joy.

“I prayed to Jesus and experienced a marvellous peace in my heart,” Jaiman shares.

Jaiman hungered for an even deeper relationship with Jesus, and soon, he wanted to start telling other people about Jesus, too.

When he was 30 years old, Jaiman became a GFA-supported missionary.

The God Who Heals

As Jaiman started interacting with people around him, he prayed for them in Jesus’ name—and Jesus started moving in miraculous ways.

“There was an old woman named Ariona,” he says. “She had been suffering with knee pain for 10 years. When we prayed for her, God healed her. Then she came to know the Lord.”

Soon, people in Ariona’s village heard about her healing and started coming for prayer. God healed their bodies and transformed their hearts, too.

Today, the man who once wandered aimlessly delights to point people to the God who gave him peace and purpose. Your prayers and support of GFA are part of stories like this that are happening every day. Thank you!

Previous: Sleeping Under a Surprise