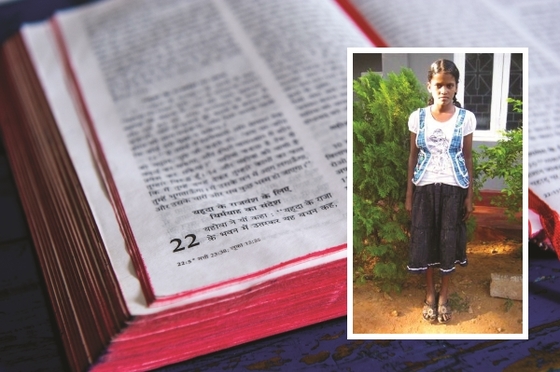 Through reading her Bible, Jenya gained a steadfast faith that Jesus could heal her crippled father—and her faith became sight.

Discovering the God Who Is Big Enough

Jenya watched as her mother rushed out of their hut to deliver the breakfast foods she had made that morning. She knew her mother, Parivita, would have another busy day of cooking and selling food to small shops. Parivita was the sole breadwinner because her husband, Himank, was too sick to get out of bed.

Life had not always been like that. Everything had started to go downhill when Himank suffered spinal damage after years of hard labour. The doctors said he would never recover. Jenya watched in sorrow as her hardworking father grew old quickly, and his heavy load was placed on her mother’s shoulders.

One day, Jenya and her brothers visited their aunt Sajili. Sajili, a believer, attended a GFA-supported church nearby. Whenever they visited her, they would attend church together. Jenya, though not brought up in a Christian home, told GFA-supported pastor Diyan about her father’s condition and their family’s poverty. The pastor prayed for them and went with Jenya and her siblings to their home to encourage Himank and Parivita in the Lord.

Jenya believed Jesus was big enough to solve her family’s problems. When she accepted the love God had offered her freely, Jenya’s heart filled with faith and joy. After that moment, Jenya began to read God’s Word and taste and see that He was good in her life.

Faith continued to grow in her heart as she turned through the pages of her Bible. God blessed her in many ways; she even started to improve in her grades at school.

Jenya believed the God of the Bible was the One who answers prayers, so she prayed earnestly for her father to become well again.

One day Jenya’s deepest prayers were answered as she found her father sitting up in bed.

This miracle deepened the faith of her brothers, and they also have experienced the love of Christ. Soon after that miracle, her father began walking to church every now and then.

Jenya’s faith deepened over time as she continued to seek the Lord and read His Word. Abundant hope fuels her prayers for her family members to know Jesus as she does.

Thank you for giving powerful gifts, like Bibles, that nurture opportunities for faith to grow!

Next: He Knew Time Was Short