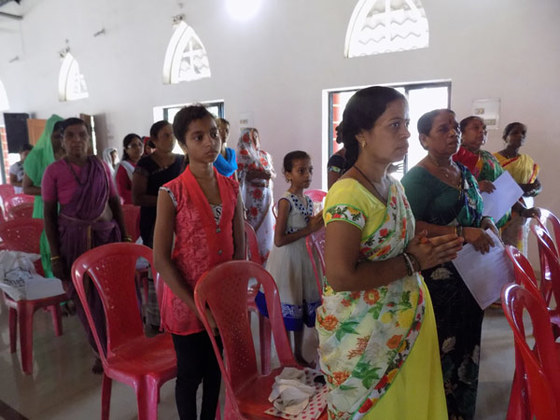 Alisya suﬀered from paralysis in her hand. She and her mother attended a free medical camp, where Alisya received medicine, instructions and prayer.

A woman and her daughter walked into the medical camp. Stress and anxiety lined the mother’s face, while pain lingered in the daughter’s. Beulah hoped that her daughter would finally be cured of her constant suffering—hope was all she had left.

Every Day a Struggle

Beulah lived with her husband and three daughters. Her husband became detached and standoffish soon after their wedding and did little but work and sleep. Beulah had attempted many times to understand why he distanced himself, but with no luck. So when Alisya, their middle daughter, fell ill, Beulah cared for her alone. Despite many hospital visits, temporary paralysis crippled Alisya.

Beulah, determined to see her daughter healthy again, did not give up. Every day, she massaged her daughter’s legs, and Alisya eventually recovered her ability to walk. Unfortunately, the pain didn’t go away in Alisya’s left hand.

During this trying time, peace eluded Beulah’s heart. Taking care of her daughter, working to pay off the medical bills and an uncaring husband all became heavy weights on Beulah.

It was during this time that a local GFA-supported fellowship held a medical camp to provide free health care and medicine for any who needed it. Ranjudeep, one of Beulah’s neighbours and a member of the fellowship, told her of the camp.

With no other viable option, Beulah took Alisya to the camp, hoping for a miracle. The doctors provided medicine and encouraged her to keep massaging her daughter’s hand.

After seeing the doctors, the mother and daughter met GFA-supported pastor Dayal Thomas, who had helped arrange the medical camp. After hearing their troubles, Pastor Dayal prayed for Beulah and Alisya and invited them to local Sunday services.

Alisya suﬀered from paralysis in her hand. She and her mother attended a free medical camp, where Alisya received medicine, instructions and prayer.

Curious, mother and daughter attended the service that following Sunday. The joy with which they were welcomed and the love of God shown through the believers transformed the mother and daughter. After continuous prayer and supplication, Alisya was completely healed!

Now, Beulah and all her daughters read from the Bible and worship the Lord. Because of the medical camp providing the care Alisya needed, the family found comfort and peace in the Great Healer.

Next: Because They Received a Toilet