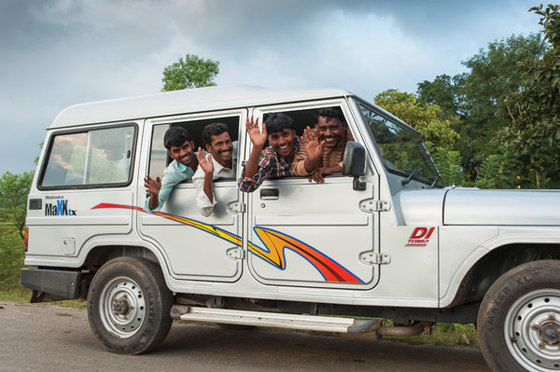 Thanks to their sturdy vehicle, mobile team members can safely travel to remote communities to share films about Jesus.

A large gathering of about 200 people crowded to get a good view. It was a film, quite the rare sight in this rural community. This film, however, was a particularly special one.

God’s Love Is for Them

GFA-supported mobile teams travel to the most remote of villages. Some of these isolated communities, hidden away from the world, have never heard the name of Jesus. One mobile team, led by Pastor Kovida, visited a similar village where GFA-supported pastor Abhinay was serving.

Two hundred men and women lived in this specific village and worked as daily wage labourer and gatherers. Some walk five miles just to find work. Poverty reigned. Furthermore, out of the 200 residents, only two had passed 10th grade.

Truly, the brothers saw that these people needed God’s love. As they mingled with the villagers, they offered Christian literature and invited them to the film showing later that night.

The Power of God’s Love

That night the villagers gathered. Pastor Kovida and his team started the film. For the first time, many not only heard of Jesus but also saw His life and ministry. This Man, who loved them so much, died on the cross.

After the movie ended, the villagers were so curious and fascinated with what they had seen, they couldn’t stop talking about it! Pastor Abhinay also talked to many of the villagers who had seen the film. Several desired to know more, so an open-air meeting was arranged for a later date.

Among those villagers were Syum and his wife, Pravina. The elderly couple was childless and alone, but after seeing the film and hearing of Jesus and His great love, their hearts were moved.

The night of the film, they opened their hearts to Christ and later attended a local fellowship. Two additional families decided to reignite their faith that night.

Through film, mobile teams like Pastor Kovida’s are able to not just share Jesus’ love but also show it.

Next: Inspiring a Girl’s Dreams Through Love