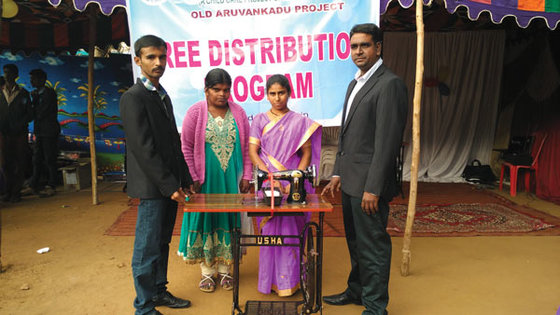 Overcoming learning struggles through persistance, Nahar (second from left) completed a Bridge of Hope tailoring class and was given her own sewing machine so she can earn an income.

Tailoring Provides Woman with a Future

Nahar’s parents looked on as she swept the floor. Her mother worried for their 21-year-old daughter’s future. Was sweeping the family’s house all she had to look forward to?

Nahar was born prematurely. Due to resulting complications, she couldn’t keep up with her peers and struggled in her education. Her parents stopped her schooling after she reached 10th grade. Nahar’s mother, Baala, anxious for her daughter’s future, wondered what could be done.

As daily labourers, Nahar’s parents struggled with their finances. However, Nahar’s younger sister received a free education through a GFA-supported Bridge of Hope centre, which also held tailoring classes. Hearing this, Baala asked if Nahar could take the lessons.

At first, Nahar struggled to keep up, but the staff took extra time to show her how to sew. Six months passed, and the young woman finished her tailoring classes!

Bridge of Hope even gave Nahar her own sewing machine, and she now stitches for her family and neighbours.

“Nahar’s life has totally changed …” Baala says. “I thank the Bridge of Hope centre from the bottom of my heart.”