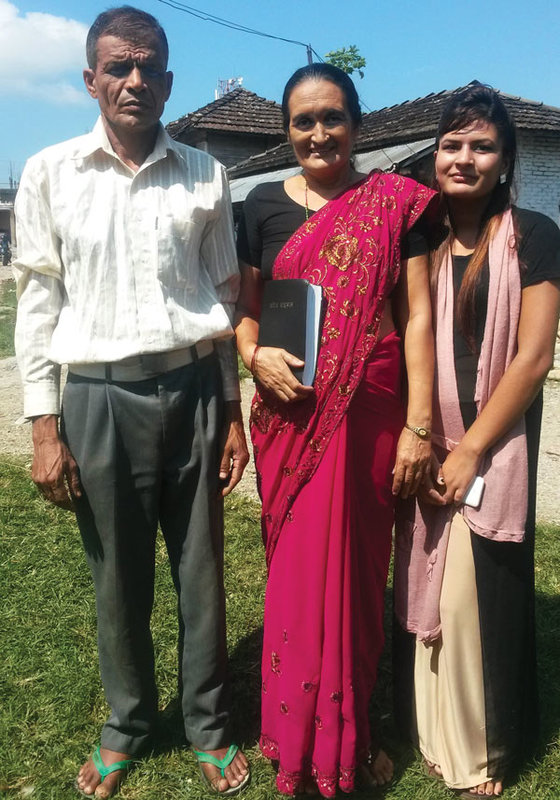 When Mala (pictured in centre) experienced God’s miraculous healing, she desired to serve Him. With this motivation, she became a GFA-supported worker, sharing with others the hope she found.

Through God’s anointing, Mala, a GFA-supported worker, has been instrumental in seeing one church and three smaller fellowships established in an area where following Jesus has a steep cost. As Mala talks to people about God’s great love, she remembers the love she experienced before she embraced Jesus herself.

Growing up, Mala followed her parents’ example of piety in traditional practices. Strict observance of the required rituals, Mala was told, guaranteed a life of peace and prosperity. Instead, her life seemed full of struggle and strife. The happy life she dreamed of drowned in the wake of her husband’s increasing alcohol and drug abuse and her own mysterious illness.

The struggling family offered many sacrifices for Mala’s healing. They sold a plot of land to afford medical visits but to no avail. Mala quickly declined, and her family prepared for her death.

Then, a doctor gave her a sliver of hope. He shared about the God who is the Healer and Giver of life and offered to pray for Mala.

“Doctor, really Jesus can heal me?” Mala asked. “If He heals me, I will serve Him all the days of my life.”

Mala began praying with a growing faith. Slowly, over six months, God healed Mala—and she remembered her promise to God.

“Lord, I am nothing!” Mala cried. “I don’t know anything, but I want to serve you with this new life that You have given me. Please, show me the way.”

The passion that defines Mala’s life and ministry, now that she is a GFA-supported worker, is the same passion that motivates other national workers. Growing up in a traditional Asian religion, Mala shares from her personal experience God’s power and the peace that comes from following Him.

God is using men and women with all different backgrounds to share His love throughout Asia. Old, young, married, single, rural and urban—these dedicated servants have one thing in common: a burden for people who do not know the love of Jesus.

Next: Desperate to Help Her Parents