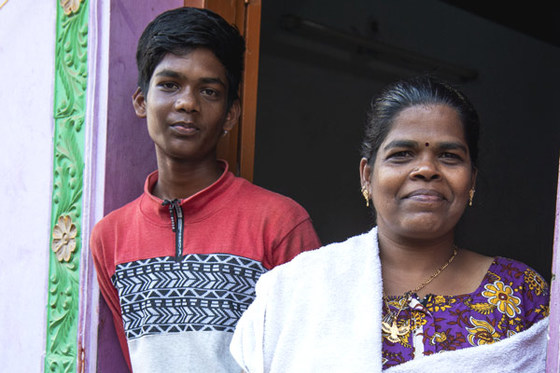 A Gift Out of the Wreckage

Tides rise and tides fall. Sometimes the sea gives, and sometimes it takes away.

The sea provides many things needed to sustain life. Yet, when provoked by cyclones or earthquakes, the sea can also destroy life in a matter of minutes, and this destructive change isn’t predictable like the tides. For Aalay’s coastal village, the sea yielded fish—the primary source of income. But on December 26, 2004, the sea’s blessings turned into a terrible curse for Aalay, who was not even 2 years old, and thousands of others.

That day, the Indian Ocean tsunami killed more than 200,000 people in Asia and Africa. Aalay and his mother were at church when waves poured into their home. The waters swept away his father’s fishing boat and nets and almost took the lives of Aalay’s grandparents, who were submerged in the floodwaters but managed to survive.

A Lifeline After Disaster

With the family’s home severely damaged and their fishing equipment destroyed, Aalay’s family had years of recovery ahead, as did their entire village.

As people returned home to ruins, GFA-supported workers saw the need to provide long-term assistance for the community. The tsunami had taken away the livelihoods of Aalay’s community, thrusting families into great financial hardship that could easily jeopardize their children’s future.

Amidst the wreckage, the Lord gave a gift. GFA-supported workers opened six Bridge of Hope centres in the region, including one in Aalay’s village, to serve the children by providing education and care.

Bridge of Hope would later offer Aalay a lifeline during a crucial time. Against the backdrop of devastation, Aalay watched his father abuse alcohol and drugs, and life’s hardships weighed on the boy. He often lashed out in anger at people, and his mother foresaw him becoming wayward. Then, around age 7, Aalay joined the Bridge of Hope program.

When Aalay set foot in the Bridge of Hope centre, he entered a loving, supportive community. He gained a quality education through the tutoring sessions. He also engaged in positive activities with other children, and he received nutritious meals, school supplies and clothes. Aalay was most impacted, however, by the dedicated staff members, who instructed him patiently and showed him the importance of education. After one of the tutors opened Aalay’s eyes to many different career options, the boy glimpsed a promising future on the horizon.

This new hope propelled Aalay to a life of purpose. With newfound discipline, Aalay implemented the advice his Bridge of Hope tutors gave about study skills and organization. Although he still played with his friends, he went home in the evenings to spend an hour studying and then say his prayers before bed. He also grew in kindness. He showed more respect to his parents, and instead of lashing out in anger toward friends, he treated them with love.

Soon the changes in Aalay’s life rippled to his family. At Bridge of Hope, Aalay learned about the dangers of substance abuse, and he shared this information with his father. Aalay’s father listened as his son told him that his addictions were destroying their family’s happiness and stability. A few months later, Aalay’s father began to overcome these addictions.

“My father’s life is so happy,” Aalay says, “and we live a peaceful and better life in my home. … [In] such a way, Bridge of Hope is helping my family and has [played] a significant role in my life.”

Today, Aalay and his family see a different forecast on their horizon than what seemed plausible 15 years ago. Equipped with the skills and drive he’s gained through Bridge of Hope, Aalay plans to pursue higher education and become an accountant. He dreams of providing well for his family one day.

Through Bridge of Hope, Aalay and his family have found a new beginning in God’s love. The sea swept away their livelihood in the tsunami, but God gave them a gift that keeps on giving.

Next: Filling an Empty Heart with Peace