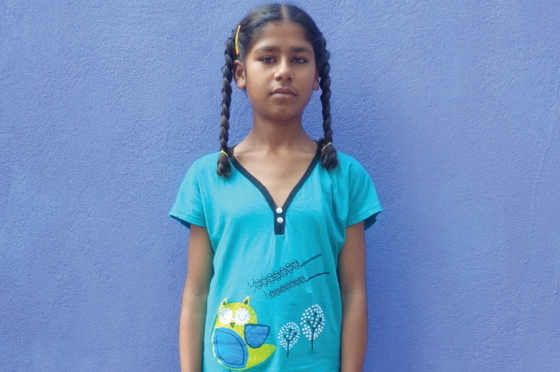 Jagavi (pictured) almost lost her opportunity for an education, until a Bridge of Hope centre opened in her village. Now she leads her fellow classmates with the best grades in her class!

A Future in Jeopardy

Some children view school as a chore, a daily routine that seems to drag on and on for years. Others see it as a stepping stone to something greater, a path into their future. And others, like the millions of children in Asia who live in poverty, see school as a dream because it is beyond their reach. Without an education, their future is bleak. Jagavi, a schoolgirl in Asia, almost lost her future.

When she was in fourth grade, Jagavi stopped going to school. The supplies she needed were too expensive, despite her father’s hard work. Jagavi and her younger siblings lived with their parents—and extended family. Living with her grandparents, aunts and uncles meant money was tight. Despite extra family members who worked as daily wage labourers, there were even more mouths to feed.

On top of this, Jagavi’s studies suffered. The young girl performed poorly, partly due to missing classes because she lacked pencils and notebooks. She was also malnourished. Her teachers scolded her for falling behind in class, and eventually, Jagavi stopped attending.

By the grace of God, a GFA-supported Bridge of Hope centre opened in Jagavi’s village. Jagavi and her younger sister were among the first to enroll. Here, Jagavi thrived. So much of what she needed was provided for: school supplies, nutritious food, tutoring and hygiene care.

The love of the staff and the encouragement they gave her propelled Jagavi to the top of her class! No longer a shy, timid girl who failed in her studies, Jagavi grew confident as she worked hard and excelled in her schooling. She even discovered a hidden talent of drawing portraits.

Jagavi’s mother, Reneeka, was overjoyed to see both her daughters flourishing.

“If the Bridge of Hope centre [was] not opened in this village, my daughters’ education would have stopped,” Reneeka says.

Jagavi’s future is no longer in jeopardy. She plans to become a teacher, like the tutors at Bridge of Hope whose love helped her become the enthusiastic student she is today.

Previous: Gift of a Cow Leads to a Double Blessing

Next: Chills of Winter Give Way to Warmth