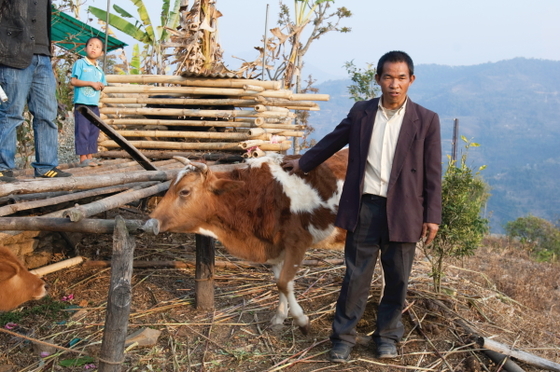 The gift of a single cow can drastically improve a family’s financial situation. Some families decide to share their animal’s offspring with others, spreading the blessing even further.

Gift of a Cow Leads to a Double Blessing

When a church led by a GFA-supported pastor had the opportunity to bless several families with Christmas gifts, Pulak’s family received a much-needed cow. The family was so grateful for the gift that when their cow birthed a calf, they felt compelled to give the calf back to the Lord.

As the calf grew, believers in the church decided to use the calf to bless another family in need.

Some of the believers had recently met a man named Yash. He and his wife struggled to care for themselves. Without any oxen, it was difficult for Yash to work and earn a living. The church decided to bless Yash and his wife with Pulak’s donated calf and another calf that had been given to the church by another family.

With the gift of the two cows, Yash was able to work plowing paddy fields, providing the funds necessary to purchase food, clothes and other essentials.

From the generosity of supporters providing Pulak’s community with Christmas gifts, Yash later received the double blessing. More than a means to work, the cows were a testament to God’s provision for Yash and his wife. Though they don’t know Him personally yet, they have experienced His love.

Next: A Future in Jeopardy