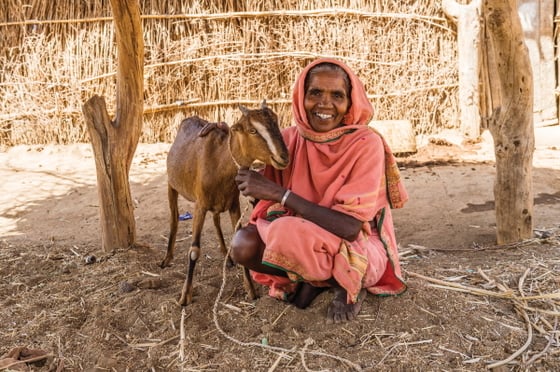 Unstable finances, malnutrition and lack of health care can all be resolved with an unusual gift: a pair of goats.

Sometimes, God decides to answer prayer supernaturally. Other times, He uses a natural solution, such as a goat. For Nand and his family, the gift of a pair of goats was the single answer to several prayers.

For Nand and his wife, day-to-day life proved difficult. They sought work each day, putting in long hours for just enough wages to buy the food they shared with their two children. If anyone in the family fell ill, which happened often, their meagre earnings had to stretch even further to pay for medicine. They sought financial relief and peace from their deities, but those prayers went unanswered.

Prayers to God Who Hears

Amid this dire situation, the family met GFA-supported pastor Dayal. Pastor Dayal told Nand and his family of God’s love for them. He also shared that God was strong enough to handle the family’s illnesses, and he prayed for their healing.

When Pastor Dayal ran into them a few days later, they looked like a new family. Their faces shone with happiness, joy and good health.

The family began attending Pastor Dayal’s church. The more they learned about God, the more attracted to Him they became and the more peace they experienced. They each decided to begin a personal relationship with God.

While the family was better equipped with God’s love, joy and peace to handle the curveballs life threw at them, their finances were still strained, and their health often suffered from lack of nutrition.

Sometime later, the church organized a Christmas gift distribution program. Thanks to generous donations, Pastor Dayal was able to present Nand’s family with a pair of goats.

The family gratefully accepted the gift, immediately benefitting from the nutritious goats’ milk. In one year, their flock of two goats grew to four, and the money they earned helped provide a more stable income and food for a nutritious diet.

Nand and his wife were thankful for the life-changing gift, saying, “We don’t have any problems now because we are getting a good amount when we sell the goats. And we are providing the goat milk for our children. Our situation has changed a lot after we received the gift.”

Who knew prayers for a stable income, food for a balanced diet and fewer sick days could be answered through the gift of a couple goats? God did.

Next: Gift of a Cow Leads to a Double Blessing