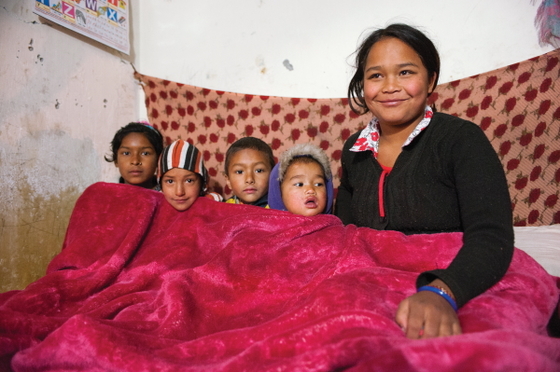 The gift of a blanket can spare an entire family from cold-related illnesses and discomfort; it can even warm cold hearts as families wrap themselves in a tangible example of Christ’s love.

When Pastor Luhit first started visiting Shalini’s village, he faced a skeptical environment. Many people didn’t trust him because they didn’t like Christians.

But Pastor Luhit’s heart of compassion didn’t waver. He knew that many of the people in Shalini’s village lived in poverty and heartache. Most depended on manual labour or farming for survival, and very few ever got the chance to pursue higher education. The pastor also knew he desperately wanted to help them.

Shalini was among those who despised Christianity; she was also among those who suffered because of poverty. Her husband laboured as a farmer to provide for the family while Shalini cared for their four children and her mother-in-law. In wintertime, the family’s small house didn’t protect them from the chilly air, but they couldn’t afford warm clothes. At night the seven family members had only one old cloth to share among themselves, so they relied on fires for warmth.

A Small Gift, a Lasting Impact

Even though many people didn’t appreciate Pastor Luhit coming to their village, he cared about them and was concerned about the difficulties people faced during winter’s cold.

“I am very happy, encouraged and blessed by receiving this gift,” Shalini said, joyfully carrying the blanket.

This blanket helped protect Shalini’s family during the cold nights, and it showed them someone cared about them. “I used to hate Christians, but they love me,” Shalini said.

The love of the believers showed Shalini that Christ loved her, too, and she began to believe in Him. Her family began praying to Jesus together each morning and evening, and they started attending worship services at the local church.

Now Shalini knows not only the warmth of a cozy blanket but also the warmth of God’s grace. And instead of hating believers in Christ, she knows they are her brothers and sisters, and she tells her neighbours and relatives about her newfound joy.

Previous: Chills of Winter Give Way to Warmth

Next: Four Feet Planted Firmly on the Rock