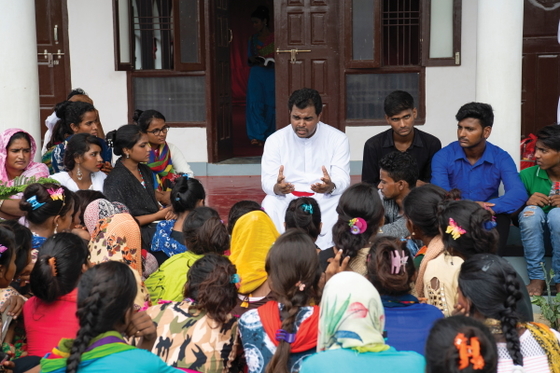 A significant role of pastors is to counsel the young people in their congregations, helping them see through temptations and remain faithful to the Lord.

Dhona lurched forward in bed. Visions of death faded as the dark room solidified before her. She scrambled out of bed and frantically looked around for the book from her childhood. Leafing through whisper-thin pages, Dhona’s heart slowed at the old, familiar words.

Dhona had learned to pray and read the Bible at a young age from her godly parents, but she never internalized the message of grace. After finishing high school, Dhona shed her religious cloak.

While at college, Dhona’s wild partying swiftly became out of control.

Heartbroken, Dhona’s parents watched their daughter throw her life away. Pastor Linn, a GFA-supported worker, tried for two years to counsel the girl who grew up in his church. But she refused to listen, blind to the terrible consequences ahead.

Eventually Dhona became a drug dealer to support her addictions.

A Nightmare, a Turning Point

One night, after years of debauched living, Dhona had a terrible nightmare about death and judgment. She sought solace in God’s Word. As she read and prayed, the words seemed to come alive, as if God were speaking right to her.

Pastor Linn came to visit Dhona. This time she listened. He prayed for her and visited almost every day. Gradually Dhona recognized the wreck of her life and asked God to help her turn from evil.

Then, at a meeting in Pastor Linn’s home, Dhona realized that despite her constant rejection of the Lord, He loved her deeply.

“I opened my heart to Jesus,” Dhona shares. “Now I understand that I’m not worthless. I’m loved by the Creator of the entire universe, who willingly died on the cross for me.”

“God is love,” says Dhona. “He does exist and does miracles. He has transformed my life. He is worthy to be praised and worshipped.”

Dhona’s life is now a testimony of God’s amazing love and grace.

Next: Lost Childhood Reclaimed at VBS