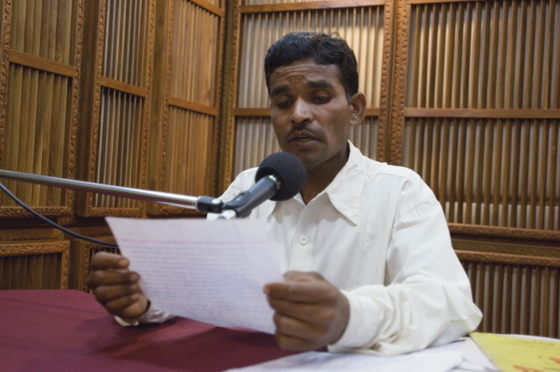 “If you come to Him by faith, He will surely heal all your pain, sorrows and troubles.” Those words echoing from the radio sparked hope in Kansha’s heart. Maybe this Jesus could help her sister find peace.

Kansha’s sister, 22-year-old Reanna, had recently moved back with her family after years of turmoil. When Reanna was in the eighth grade, her parents arranged her marriage. As was the custom, the young girl moved to her husband’s home.

At first, the newly married couple lived a happy life. Reanna’s in-laws and husband treated her well. But when Reanna wanted to continue her education, her husband and in-laws denied her request seeing no importance in it. Reanna talked to her parents about her desire, but they, too, refused to support her. Reanna’s hopes and dreams were crushed, and she fell into a deep depression.

Two years later, Reanna’s husband and in-laws noticed how Reanna would withdraw and lash out at them.

They sought help from witch doctors, but after seeing no change, Reanna’s irritated in-laws sent the young woman back to her parents. Her parents consulted many doctors and mental health professionals, but they couldn’t offer a solution.

One day, while Kansha, Reanna’s sister, was listening to the radio, she came across a station talking about Jesus and His power to heal. Nothing else had helped Reanna, so Kansha decided to call the radio speaker.

Kansha told of her sister’s troubles to the speaker, GFA pastor Dhiraj, and he suggested Kansha bring Reanna to his church’s day of prayer the next Tuesday. When the sisters arrived at the church, Pastor Dhiraj and the congregation prayed for the troubled young woman. After that, Pastor Dhiraj offered the sisters a New Testament to take home and invited them to visit again.

Kansha and Reanna faithfully attended church services, and they fellowshipped and connected with the believers. Over the next few months, Reanna’s depression lifted, and her family rejoiced at the change. Now, instead of sadness, the joy of Christ dwells in Reanna’s heart, and it all started when words of hope echoed from the radio.

Next: A Future After the Tsunami