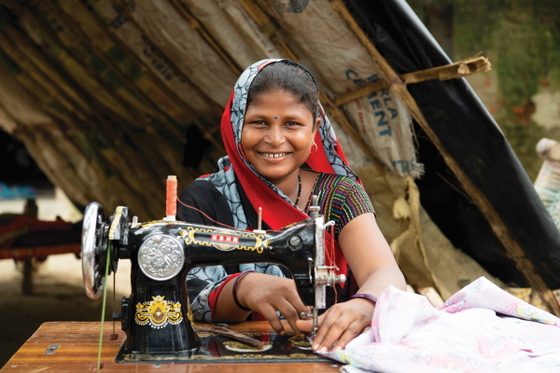 For the countless women solely responsible for providing their household’s needs, a sewing machine is a tremendous help for earning a sufficient income.

When Hope Met Their Hardships and Hard Work

Daya’s life turned upside down the day her husband, a labourer, fell off a roof and died. Daya, a stay-at-home mom, had to find work to feed her three children. Unfortunately, the job she found at a matchbox factory provided very little income. Financial hardships forced Daya’s two daughters to stop their education after 10th grade. Instead of finishing school and pursuing higher education, they helped keep the family afloat. The older daughter worked as a nursery school teacher, and the younger daughter cared for their brother and kept the household while her mother and sister were at work.

Soon, Daya found an unexpected source of strength. After attending a worship service hosted by GFA pastor Sachitan, Daya felt an enormous sense of peace. She began going regularly to the worship services. Her children eventually joined her, and the entire family experienced God’s love.

Daya and her children found lasting hope when they decided to trust Christ with their lives. They also learned that He cared about their practical needs.

Pastor Sachitan noticed how hard the family worked—and how they struggled just to meet basic needs. He requested that Daya receive a gift at the next GFA Christmas gift distribution. At the event, Daya and more than 50 other widows received sewing machines! Tears filled Daya’s eyes as she kissed the smooth, dark surface of her gift. For Daya, it represented a chance for her family to thrive, not just subsist. She thanked God for providing for her family.

Embracing the Chance to Thrive

Daya already knew how to sew, so she got to work sewing clothes for her family and taking sewing jobs from people in her village. Soon, her skills earned her more jobs as people saw she charged less than the market rate.

Over time, Daya’s younger daughter learned to sew, too. While Daya worked in the factory, her daughter sewed at home. When Daya returned, she would resume the tailoring jobs.

Not only did the family save money by sewing their own clothes, but they also significantly added to their income through their growing tailoring business.

Though Daya and her family still face challenges, they know they serve a God who cares for them. Through the sewing machine He provided and their hard work, they have hope for financial stability.

Next: Prison Gifted with Sewing Machines