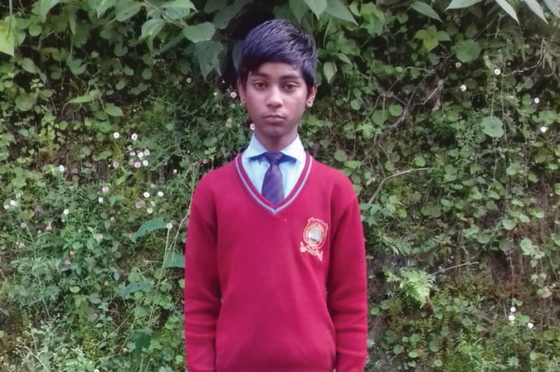 Keahn (pictured here) changed from a rebellious little boy into a motivated and happy student through the counsel and help of his Bridge of Hope teachers.

Worried for Their Son’s Future

School didn’t interest Keahn. At only 8 years old, the boy was performing poorly in school, and he didn’t care to improve. He also didn’t listen to his parents. Instead, Keahn wandered with his friends, slacking and goofing off. His parents lost hope their only son would change—until Bridge of Hope entered their lives.

One day, GFA workers at the local Bridge of Hope centre met Keahn’s parents. The workers suggested Keahn be enrolled into the Bridge of Hope program.

Keahn started attending the centre that week. There, the young man found encouragement and direction in his studies. Keahn was given items that would help him learn and grow: books, hygiene items, school supplies, utensils and school uniforms. Every day, Keahn and the other children received a warm, nutritious meal made for them by the Bridge of Hope staff.

The Impact of Teachers

Three times a month, a few of the staff members visited Keahn’s home to learn how to best help him and his family. The young boy’s parents relayed the troubles they had with their son and expressed their dismay at Keahn’s rebellious attitude. Now informed, the workers set about by continuing to pour love and encouragement into Keahn. Through diligent instruction and loving correction, they sought to enact change within the disobedient young boy.

As the days morphed into months and the months into years, an incredible transformation took place inside Keahn. He is no longer a boy of rebellion and disobedience; instead, he is a son marked by discipline and happiness. His parents rejoice at the change in their son and don’t worry about his future anymore. Keahn attributes this change in his heart and mind to the Bridge of Hope staff and considers it a great privilege to be enrolled there.

Keahn (pictured here) changed from a rebellious little boy into a motivated and happy student through the counsel and help of his Bridge of Hope teachers.

“I want to become a teacher,” Keahn says, with eyes full of hope. “I want to help the poor children like me in their studies to achieve their goals.”

Previous: Letting Love Do the Talking