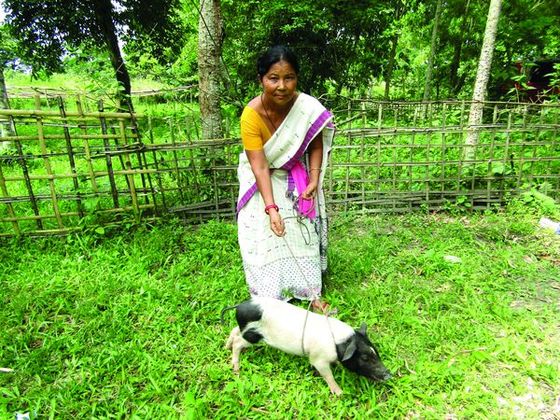 When Chunni (pictured) received an unexpected gift from the church, she was overwhelmed by God’s love as she realized He used His children to provide for her and her children.

Friendship and a Piglet Comfort Widow

Another “no” hung in the air. Once again, Chunni pleaded for help from a family member, and once again she received an excuse about why they wouldn’t help. How would Chunni provide for her family?

After her husband’s death, Chunni had to support her three children and mother-in-law. She wanted to open a small grocery shop in her village but did not have any capital. Reluctantly, Chunni took out risky loans to give her family a chance to survive.

A New Friend, a New Hope

One day, ladies from the local GFA Women’s Fellowship knocked on Chunni’s door and offered to pray for her. Normally, Chunni brushed aside Christians, but she recognized a face in the group—Rita, whom she had met at a friend’s wedding.

Rita’s eyes lit up, excited to reconnect with Chunni. Even though Chunni was not interested in the message of God’s love the women shared, she was interested in friendship.

Over the next several months, Chunni opened up to Rita: Loneliness plagued her, and her shop was barely keeping the family afloat. Rita encouraged Chunni from the Bible. While Chunni ignored the wrapping of Scripture, she gratefully accepted the gift of care and concern it enveloped.

Moved by her friend’s difficulties, Rita talked with her husband, a GFA pastor. They thought an animal might supplement Chunni’s income.

A few weeks later, at a gift distribution, Chunni walked away with a piglet wriggling in her arms. She still couldn’t believe the church had given her something so valuable. They weren’t her family; she did not even attend their church, and yet they helped.

These thoughts swirled in Chunni’s head and softened her heart. Maybe this God of love was real. Maybe He loved her. He had sent Rita, hadn’t He? He helped her when no one else would, didn’t He?

Chunni decided to visit the church. During the service, love, joy and hope, which had abandoned Chunni long ago, flooded her heart.

After experiencing God’s love through the church, Chunni gained not only friendship and a piglet, but also eternal life. Now Chunni has financial security through her piglet, and she has spiritual security in Christ.