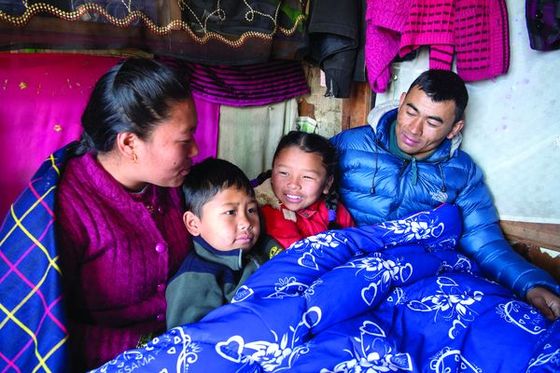 Rachana’s family, like the one pictured, lives in a region where cold winter nights threaten the health of thousands of people who can’t afford good blankets.

Rachana sat in the room that served as kitchen, living room and bedroom for her family of seven. She picked up an old garment from a small pile. Her mind organized the garment’s shape into an irregular quilt pattern, trying to preserve every inch of fabric—it would be one of the few things protecting her family from sub-zero temperatures.

Rachana and her husband, Chand, worked in a pencil factory, where they earned only small wages. Even so, they were grateful to have consistent work. They carefully managed their home, trying their best to provide for their three children—ages 9, 10 and 15—and for Chand’s parents.

But their meagre income could only stretch so far. Their rented home consisted of one room. The floor served as their bed. Each of the seven family members owned only a few sets of clothing.

Chand’s parents helped by watching the children while Rachana and Chand worked, but they also needed occasional medical attention. The children’s school imposed no education fees, but it did require materials, shoes and bags. Each additional expense added an almost unbearable burden to the family’s precarious situation.

Then each year, winter came howling at Rachana and Chand’s door. Most people in their village fell ill during the cold months. Rachana’s family—especially her children and elderly in-laws—suffered in the freezing temperatures. Scrimping and saving all year enabled Rachana and Chand to purchase sweaters and shawls from the very cheapest market, but buying warm blankets was impossible.

To protect her family from each bitter winter, Rachana stitched makeshift quilts using the household’s worn-out clothing. The treasured homemade blankets offered a degree of protection but not nearly enough for the severity of the season. Her family still shivered on the floor at night, vulnerable to illness as they awaited dawn’s warming sun. 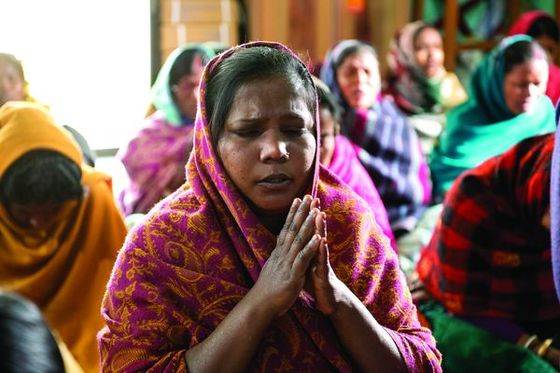 Gifts of blankets or winter clothing have brought warmth, protection and joy to many people, including GFA workers, like the woman pictured above, and the people they minister to, like Rachana.

While living in this condition, Rachana met Sachitan, a GFA pastor. The two talked, and Pastor Sachitan invited Rachana to visit the worship services at his church.

The first time Rachana went to church, she felt something wonderful: She felt peace and happiness, even amidst her difficult circumstances. Excited about her taste of God’s goodness, Rachana urged her family to come with her. Soon, they could all be found praising God for the righteousness He bestowed on them through Jesus.

Their hearts rejoiced—but their bodies still shivered. When the next winter arrived, God protected them from fatal illnesses that threatened them at night. He sustained them through another year of financial struggle. Then when winter approached again, God moved on their behalf in a new way.

One January day, Pastor Sachitan held a thick, beautiful blanket. He had several blankets to distribute to members of his community, and he knew exactly who needed one.

When Rachana’s family members saw their new warm blanket, wide smiles spread across their faces. It was more than they could have ever hoped to buy, and it was a gift from their Lord.

Rachana’s children beamed with delight as they crawled under the heavy blanket that night—and all winter. Now the family could redistribute their homemade blankets to better protect each sleeper. Their health improved and remained strong through the cold, much to Rachana and Chand’s relief.

Rachana and Chand still work hard to meet their family’s basic essentials, but their blanket is a testament to God’s concern for their needs. Thank you for partnering with us and enabling families in Asia to experience God’s loving hand.

Next: Graduate Shares Her Bridge of Hope Experience