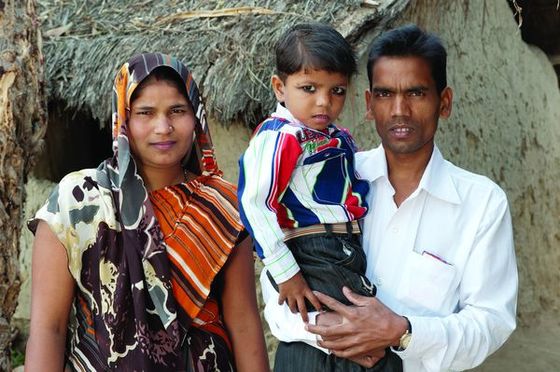 Hasan and Sajala, like the family pictured, struggled to meet their basic needs until the Lord brought them hope in the form of an income-generating gift.

A Gift from Someone They Almost Abandoned

After years of desperate struggle and heartbreak, Hasan and his family learned about the love of Jesus, and He did a miracle for them. But their happiness and faith flickered under outside pressure to return to their old faith. Then Hasan found himself out of work. As a grim sky rolled over the horizon, would Hasan and his family turn their backs on Christ?

Previously, Hasan worked as a cook in a hotel to provide for his wife, Sajala, and their son and daughter. Hasan earned about $45 a month, which didn’t meet his family’s needs. In addition, if something went wrong at work, the hotel owner unfairly reduced Hasan’s wages.

Hasan and his wife, however, faced an even more painful dilemma: the life-threatening heart defect of their only daughter, Rebha. Doctors predicted the girl had only a few months to live without surgery, but even an operation might not save her life. Hasan and his wife couldn’t afford the surgery or good hospital care for their daughter.

Hasan sought help in temples and went into debt to pay for Rebha’s medicine. But nothing healed his daughter.

One day, a relative told Sajala to visit a church, proclaiming Rebha would find healing there, but Sajala couldn’t find one in her area. When Hasan moved the family to a nearby city in search of a better job, however, they found a church.

They joined worship services regularly, and three months later, they saw the miracle their relative had predicted: Jesus healed Rebha. Seeing the power and grace of God, Hasan and his family decided to follow Christ.

Then their decision faced a test. The pastor of their congregation left the city, and the church scattered without a pastor. Facing pressure from relatives and the local community, Hasan and his family almost returned to their old faith.

“We were looking for a fellowship group but did not find [one]. Thus we were about to backslide,” Hasan remembers.

After a few months, however, GFA pastor Rajdeep started a fellowship to unite and nurture the discouraged believers. Soon, one of the local believers took Pastor Rajdeep to Hasan’s home.

When Pastor Rajdeep came to Hasan’s door, he found a desperate family. Hasan told the pastor how he had left his job because of the hotel owner’s mistreatment, but he couldn’t find another one. Pastor Rajdeep encouraged the family, sharing promises from Scripture.

After their conversation, Hasan and his family began attending Pastor Rajdeep’s church. Soon, Hasan’s heart turned to Christ again. He cried out to God in repentance, and the Lord not only showed mercy but also sent the family practical help. 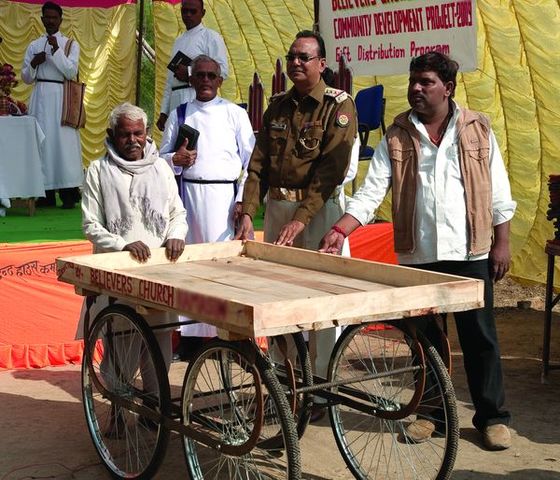 Simple but effective, pull carts give people the opportunity to start businesses and earn a decent income for their families.

Provision from a Pull Cart

Pastor Rajdeep knew about Hasan’s poverty and debt, and the pastor submitted Hasan’s name for the next Christmas gift distribution.

At the Christmas gift event, Hasan received a pull cart—and the chance to start a business. Hasan developed a plan to sell eggs on the street in his city, and he began earning about $15 a day. In three days, he could bring home more money than he had previously earned in a month! Hasan soon paid off all his debt.

Hasan and his family’s hearts filled with gratitude as the burden of poverty slid off their backs. They served God by faithfully joining in worship services and activities with the church; Hasan even helped construct the church building. Every week, he brought an offering to church, returning a gift to the God who gave his family a second chance.

Poverty-alleviating gifts like pull carts help families earn steady income and experience Christ’s compassion. Thank you for helping give people like Hasan and his family the chance to thrive.

Next: Panic Drives Mom to Prayer