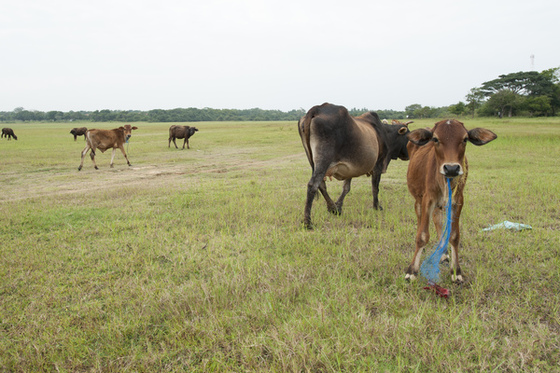 A cow can give a struggling family a rich source of milk, providing vital nutrition.

Sahoj’s cow mooed quietly beside her as they made the journey home from the gift distribution ceremony.

Sahoj knew this cow would be another turning point in her life, much like when she met GFA pastor Nischal one year previously. Sahoj’s 15-year-old daughter had contracted malaria and suffered excruciating headaches, chills and fever. The mother offered chickens, pigs and goats in rituals to heal her daughter. Her stable was empty while her daughter’s illness remained.

Then Sahoj met Pastor Nischal. He prayed for the sick girl and visited weekly to encourage the mother and daughter. Slowly, Sahoj’s daughter recovered, and both women put their faith in Jesus.

Malaria defeated, Sahoj still battled poverty. She picked up odd jobs: housecleaning, laundry and work in paddy fields. But a steady income remained elusive, and Sahoj struggled to meet their daily needs, let alone save for her daughter’s future.

A Cow Changes Everything

Pastor Nischal helped Sahoj once again when he arranged for her to receive a cow at a Christmas gift distribution. Soon, Sahoj’s cow had a calf. And then another. And another. After five years, Sahoj’s herd had expanded to six cows, which produced plenty of milk to drink and manure to enrich the family’s land. She earned income selling the remaining manure, and this enabled Sahoj to leave her neighbour’s fields and work her own land, growing wheat, potatoes and onions. With financial security established, Sahoj could save for her daughter to get married one day. When the time came, Sahoj could pay for the necessary wedding-related expenses—something that might have been impossible in their poverty.

Sahoj told other women about all God had done for her, and eventually six more women joined her in worshiping Jesus at Pastor Nischal’s church.

Thank you for investing in God’s work by helping struggling and destitute people like Sahoj. Your gifts and prayers make it possible to share God’s love in word and deed—even through a cow!