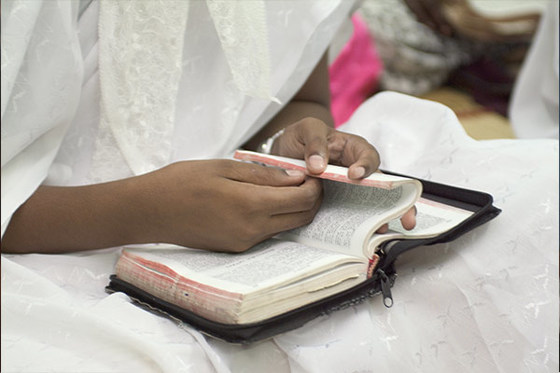 Nithya learned life-changing truths about Christ by reading the words of Scripture.

Nithya’s family had once been whole, her parents and five siblings living in harmony. But that changed when the girl’s parents divorced because of her father’s infidelity, ripping love from their home.

Nithya’s mother remarried one year later, but this did not fulfill any hopes Nithya may have had for a loving father figure. Her stepfather drank heavily, and nothing could shake him from his addiction.

The absence of Nithya’s father and the emotional distance of her mother and stepfather stung Nithya. The girl withdrew within herself, unhappy and alone. Insecurity burrowed its way into her heart.

Soon, Nithya endured the added burden of a health condition. She suffered jaundice, and it prevented her from attending school. While Nithya sat in the sun one day, GFA pastor Hansaraj and two other pastors came along and talked to her. She had no desire to hear what they had to say. Before they left, they prayed for Nithya and offered her a New Testament, which she reluctantly took.

The New Testament sat for several days untouched and ignored. But then, Nithya’s curiosity got the better of her. She began reading it, and one verse caught her attention: “For God so loved the world, that He gave His only begotten Son, that whoever believes in Him should not perish but have everlasting life” (John 3:16).

This Jesus, sent by His Father, died for her. God was willing to let His Son die for her? She needed answers.

At a Christmas Eve program hosted by Pastor Hansaraj’s church, Nithya listened to the pastor share of the birth of Jesus. As she listened, she realized God truly loved the world so much He sent Jesus to die for her sins.

“I have now found the loving Father who gave His own Son to die on the cross to forgive my sins,” she remarked.

Two weeks later, Nithya opened up her heart, receiving the love she had desperately desired for so long. She knew she was loved, she was cherished, she was wanted.