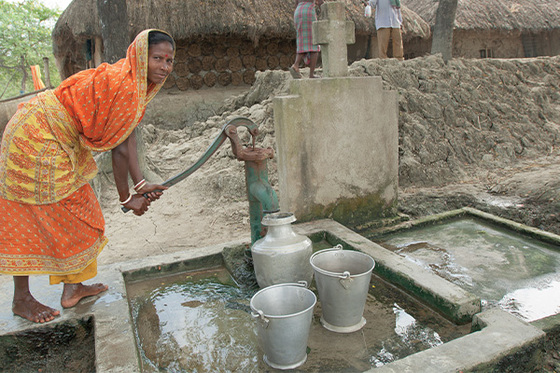 GFA Provides Access to Clean Water for Village of 200

These words intrigued 40-year-old Jahaira as she began collecting water at the newly installed Jesus Well, which served around 200 people.

For some time, people in the remote village had drawn water from a pond nearly a mile away. The water, polluted through bathing and washing clothes, sickened many who drank it, including Jahaira, who suffered from near-constant stomach pains and diarrhea from drinking the dirty water. But no other nearby water source existed.

The doctors could not heal Jahaira’s sicknesses, and their treatments didn’t alleviate her pain. All they could suggest was for Jahaira to boil her water before drinking. There should have been a better solution.

By God’s providence, a better solution arrived. GFA pastor Badan, who led a church in Jahaira’s village, requested a Jesus Well for the village. After the well was installed, many villagers gathered their water from it, including Jahaira.

A week later, Jahaira’s stomach pains and diarrhea vanished. She believed it could have only been the result of drinking the pure, clean water from the Jesus Well, which had a plaque inscribed with John 4:14. Jahaira wanted to know more of this Living Water she saw spoken of on the plaque, so she talked to Pastor Badan. He told her about God’s love for her.

Today, Jahaira rejoices in both the Living Water and the physical water God has provided.

Learn More About How GFA Provides Access to Clean Water »

Next: The Gift of Education