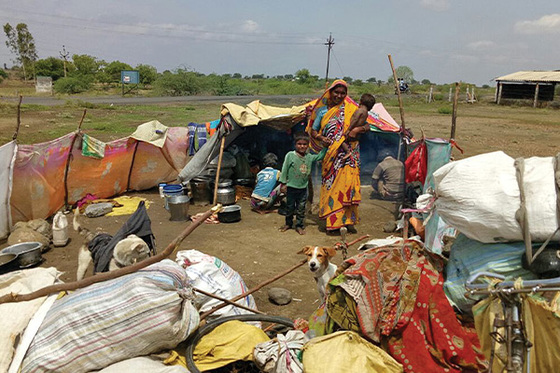 Taboras and his family (pictured) earn a living collecting and selling rags and garbage.

The Gift of Education

Poverty surrounded GFA pastor Vasek. One day, the pastor happened to meet two young boys—two young boys who should have been in school. When the pastor asked them how they were doing, the boys shared with him about their lives and invited him to their home. A few minutes later, they arrived at a ramshackle tent made of plastic bags and strips of fabric that were held together by sticks.

Pastor Vasek then met the boys’ 55-year-old father, Taboras, their mother and nine siblings. As they conversed, Pastor Vasek asked if any of the children went to school. No, Taboras responded. They helped him by scouring small hills of refuse for bits of rags and other sellable pieces of garbage. It was their livelihood, the only way they could sustain themselves. Sending his children to school would mean the family could lose wages needed for survival.

A Future Beyond a Garbage Heap

But Pastor Vasek knew an education would open avenues for a successful future that would otherwise be closed to them. Should they not attend school, they would forever be stuck in poverty.

The pastor explained to Taboras the benefits of an education. His children would learn things that could help shape a better future, one that didn’t include picking rags the rest of their lives.

Hearing the pastor’s explanation, Taboras agreed to send his school-aged children to get an education. Pastor Vasek helped four of Taboras’s children enroll in the local school, paying the fees himself.

Every day, Taboras’s children went to school instead of to a garbage heap, and they tackled the new lessons set before them. Taboras thanked the pastor for helping him send his children to school. Now, Taboras and his wife know their children have a chance to embrace a brighter future beyond the garbage heap.

Previous: GFA Provides Access to Clean Water for Village of 2…