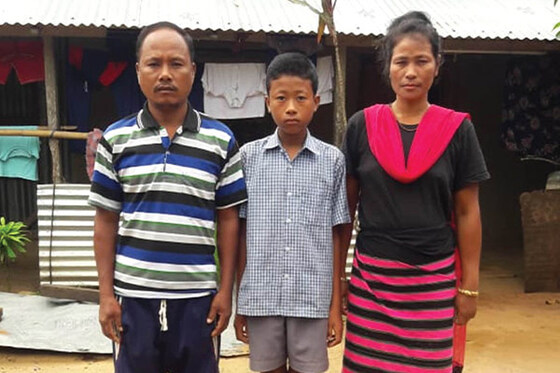 Rabee (pictured with his parents) once didn’t want to attend school, but GFA World’s child sponsorship program helped motivate him to success.

A Second Chance for Success

Today, teenage Rabee encourages other students to listen to their teachers and be obedient. He actively participates in games, sports and other events. He faithfully does his schoolwork. But Rabee didn’t always show the promise of becoming an exemplary young man. Ten years ago, he was a small boy whose life was defined by shame. Ten years ago, he didn’t want to go to school; he was just hoping for a good meal.

Second Chance for a Struggling Boy

Rabee’s father, a daily wage laborer, struggled to provide for his wife, two daughters and Rabee. He couldn’t afford to buy the notebooks, clothing or pencils his children needed for school, and he felt ashamed. Rabee, the youngest, struggled with physical weakness that often debilitated him, perhaps because of malnourishment. Even when he was physically well enough to attend school, he had only shabby clothes to wear, and he couldn’t take notes since he had no notebook. Rabee, like his father, was ashamed, so he often skipped school. It was unlikely he would continue on in school and graduate one day.

But in 2011, Rabee got the chance to join GFA World’s child sponsorship program. Hope and excitement seeped into his parents’ hearts as their son gained a second chance to succeed.

Rabee, on the other hand, was only excited about the free meals. He had already lost interest in education. But as he continued to come to the program, things changed. The nutritious food helped him grow healthier. The staff members’ patient teaching and guidance eventually motivated the boy to learn. Soon, his grades improved.

The changes in Rabee’s life filled his parents with joy.

“Rabee has improved in many areas of his life,” his mother says.

Rabee’s father adds, “I have never thought of living a happy life due to heavy burden and guilty feeling in my life. Because, as a father, I was not able to provide for my children all they needed, but [GFA World’s child sponsorship program] changed our lives. We are happy and grateful for this great help.”

Poverty, discouragement and shame almost robbed Rabee of a future. Today, because of the education and care he has received through GFA World’s child sponsorship program, he has the chance to achieve success in life.

Previous: A Faith Tested by Fire

Next: Desperate Wife Seeks Hope for Her Marriage