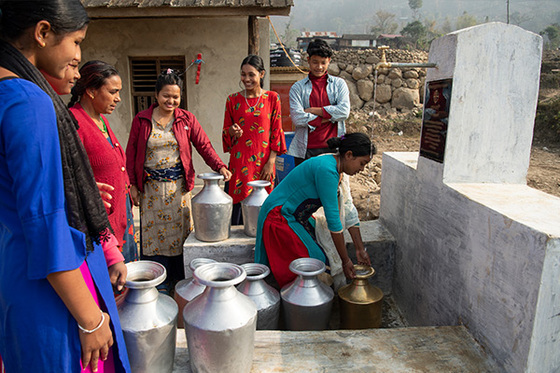 The inauguration of a Jesus Well often fills people with joy and gratitude as they receive the gift of clean water—and with it, health and hope.

Gift Offers Hope for Next Generation

For Mai and the other children of her community, daily life carried risks. One of the biggest risks was getting sick with typhoid, diarrhea, malaria or another waterborne disease. And it was a risk these children couldn’t avoid: Their only water sources were open wells, ponds and rivers, which were contaminated by cow dung, leaves and trash. In the summer, these sources dried up.

GFA pastor Raffe saw the residents’ hardships, and he and other Christians in the village began to pray for a well that would supply clean water. The next year, ministry leaders approved Pastor Raffe’s application for a Jesus Well. When the villagers heard they would receive a new well—one that could yield pure water for years to come—excitement buzzed around the village.

After the well was drilled, families began using it daily. They finally had clean water for drinking, washing produce and watering their cattle.

“For a long period of time, ... we were facing shortage of clean drinking water,” says Mai, who was about 13 years old when the Jesus Well was installed. “But at the right time, [the church] got a Jesus Well installed for us to have enough pure water for our needs.”

With the clean water, the families’ health improved. They saved money that earlier would have been spent on medical treatment. Things looked brighter for the next generation. They now had the chance to enjoy freedom from the cycle of sickness and poverty that had shackled their parents. They could dream and plan for better lives as waterborne illnesses no longer drained their energy and resources, giving them more time to be productive.

Gratitude filled the villagers’ hearts, and some wanted to know about the One whose name was inscribed on the well. Mai and her family were among them. They began to visit the local church, where they could learn more about Jesus, who offers Living Water. Eventually, Mai and her parents decided to follow Him.

Through the gift of a Jesus Well, Mai and her village not only have hope for better lives, but some have also found the living, steadfast hope Christ offers.