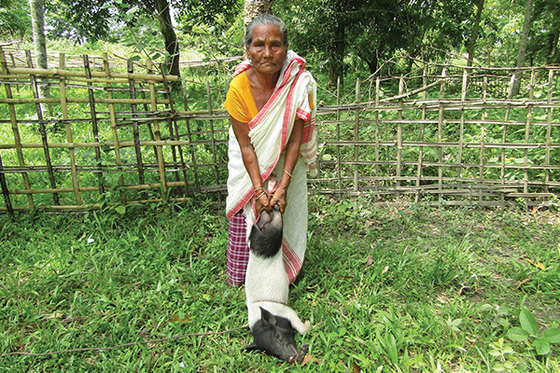 The unexpected gift of a piglet brought tears of joy to Tahiya’s eyes (pictured).

Tahiya’s house was silent. Perhaps tears rolled down the widow’s cheeks. She had no one to talk to, no one to care for her. Her days were full of sorrow and toil.

Tahiya’s husband had succumbed to a prolonged illness 10 years prior. She lived for a time with her son and daughter-in-law, but the daughter-in-law made life difficult for Tahiya, mistreating her and finding fault in everything she did.

Heartbroken, Tahiya had sought comfort from her deities, but found no solace or joy. Tahiya resigned herself to accept that there is no true happiness in this world.

Lonely and poor, Tahiya began working in a tea garden. Perhaps she sought companionship as much as an income. Perhaps it also offered a distraction from her troubles. But these things did little to fill the void in Tahiya’s heart. Life seemed cold, empty and hard.

GFA pastor Damek, serving in the area, heard of Tahiya’s situation and pondered how he could help. He began to regularly visit Tahiya, encouraging her and praying for her. Pastor Damek took on the role of a son, showing Tahiya love and kindness.

Tahiya took comfort in the pastor’s visits. When he spoke from God’s Word, Tahiya felt joy within her soul, perhaps for the first time in her life, and she urged him to continue praying for her. Pastor Damek explained to Tahiya that Jesus loved her and was watching over her. This comfort became vital to Tahiya—especially after her son and daughter-in-law decided to move out, leaving her alone.

Meanwhile, Tahiya began occasionally attending church where she enjoyed the music and fellowship. She began to understand that Jesus was a loving and merciful God. Yet she wasn’t fully convinced He was the only God.

Then came an unexpected gift with an “oink.” Aware of Tahiya’s needs, Pastor Damek had arranged for her to receive a piglet as part of a GFA Christmas gift distribution. Tears filled Tahiya’s eyes as joy burst through her heart. She couldn’t believe the tremendous kindness and concern displayed by this gift. It drew her closer to the Father and built her confidence in Him.

With deep gratitude for the blessing and love represented by the piglet, Tahiya began attending church regularly. A year after receiving this tangible gift of love, Tahiya told Pastor Damek she wanted to love and serve the Lord her remaining years. His love had turned her sorrow into joy.