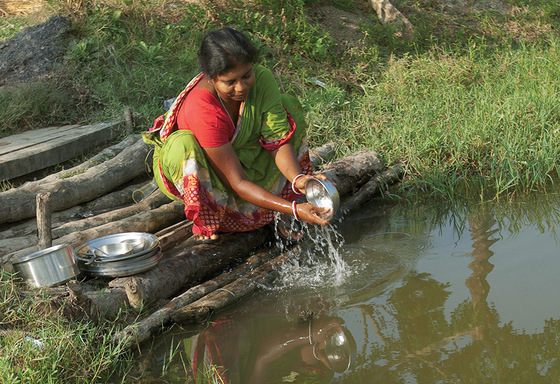 Nabarun and Adishree Paavan didn’t have a bathroom with a tile floor, vanity and mirror.

They didn’t even have indoor plumbing. Instead, they walked about half a mile from their home to relieve themselves. On her way to the bathroom one day, 48-year-old Adishree fell, injuring herself badly. The fall left her handicapped, and her condition required surgery.

Adishree and Nabarun are one couple out of millions of people in India lacking sanitation facilities. More than 80 percent of rural dwellers and more than 50 percent of city households do not have basic sanitation systems. Especially during the rainy season, people contaminate living spaces by relieving themselves near houses or beside village roads. Out of 1,000 Indian children, 63 die by age 4 or younger, mainly from diseases linked to poor hygiene.

A lack of sanitation facilities affects women’s futures too. Girls in India often cannot attend school unless the institution has a sanitation system. Furthermore, going to solitary places alone after dark can be a safety risk for women. Sanitation and hygiene are grave and widespread issues in India.

Help from the Church

Through local believers, the Paavans found help and hope. After discovering she needed an operation, Adishree asked GFA pastor Falak Sayed to pray for her. Thankfully, the operation was successful. Later, the Paavans began to attend Pastor Falak’s church and responded to the love of Jesus. After taking care of the Paavans’ spiritual needs, the church looked to meet their physical needs as well.

On November 15, 2012, a sanitation and cleanliness project began. Led by GFA-supported workers, it focused on raising hygiene awareness, providing safe drinking water and introducing clean facilities. One newspaper reported that the program planned to reach nearly 1,000 villages with sanitation resources.

The believers held a “Clean and Healthy” awareness meeting on February 2, 2013, to officially inaugurate the sanitation initiative. About 500 children and their parents sat and listened to a medical doctor, a regional church leader and several others speak. The church leader summed up the believers’ reason for the program.

“God is love, and we are motivated by the love of God to serve others,” he said.

As part of the initiative, about 25 families received toilets, among them Nabarun and Adishree. By donating outdoor toilets and other gifts through Gospel for Asia’s Christmas Gift Catalogue, people like you are impacting families like the Paavans. Thankful for convenient and safe sanitation facilities, Adishree and Nabarun now know that Jesus loves them individually and cares about their needs.

Previous: Delivered from Darkness to Light

Next: ‘My Life Is in Christ’: One Man’s Journey from Depr…